It’s that time of year again! It’s time for the Before and After DIY Contest

hosted by One Project Closer!

I’m partnering with One Project Closer to help them co-host their annual Before and After contest which raises awareness for Habitat for Humanity.

I am a HUGE fan of Habitat for Humanity, so this is a great opportunity to enter to win a prize for yourself and a prize to help others.

Here’s How to Enter:

You’ll see the Linky party at the end of this post, so if you have a project to enter, feel free to do so now!

I’ll be choosing the winner of this contest by Sunday evening, July 7th. 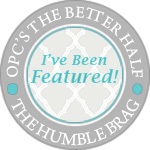 « Decorative Burlap Memo Board {for my office}
Favorite PINS Friday »