It’s FRIDAY!!!! Which means another episode of Notes from Home is LIVE!!  WHOOP!

In this week’s video, we answer some of the questions we have been getting a lot lately about our move from Kentucky to Tennessee.  We are also going to share a little more of the demo process (WITH safety glasses.)

But before I share the video, I wanted to share some of my OWN photos that I took of the demo process.  Each week, I am going to be sharing blog posts that go with our Notes from Home series.  We are not always able to add everything in the videos, so these pictures give you a little more of the “behind the scenes.”

When we first saw our new home (before we put an offer on it,) the two things that stood out to us the most were the sunken den and the long wall separating it from the formal living/dining spaces. 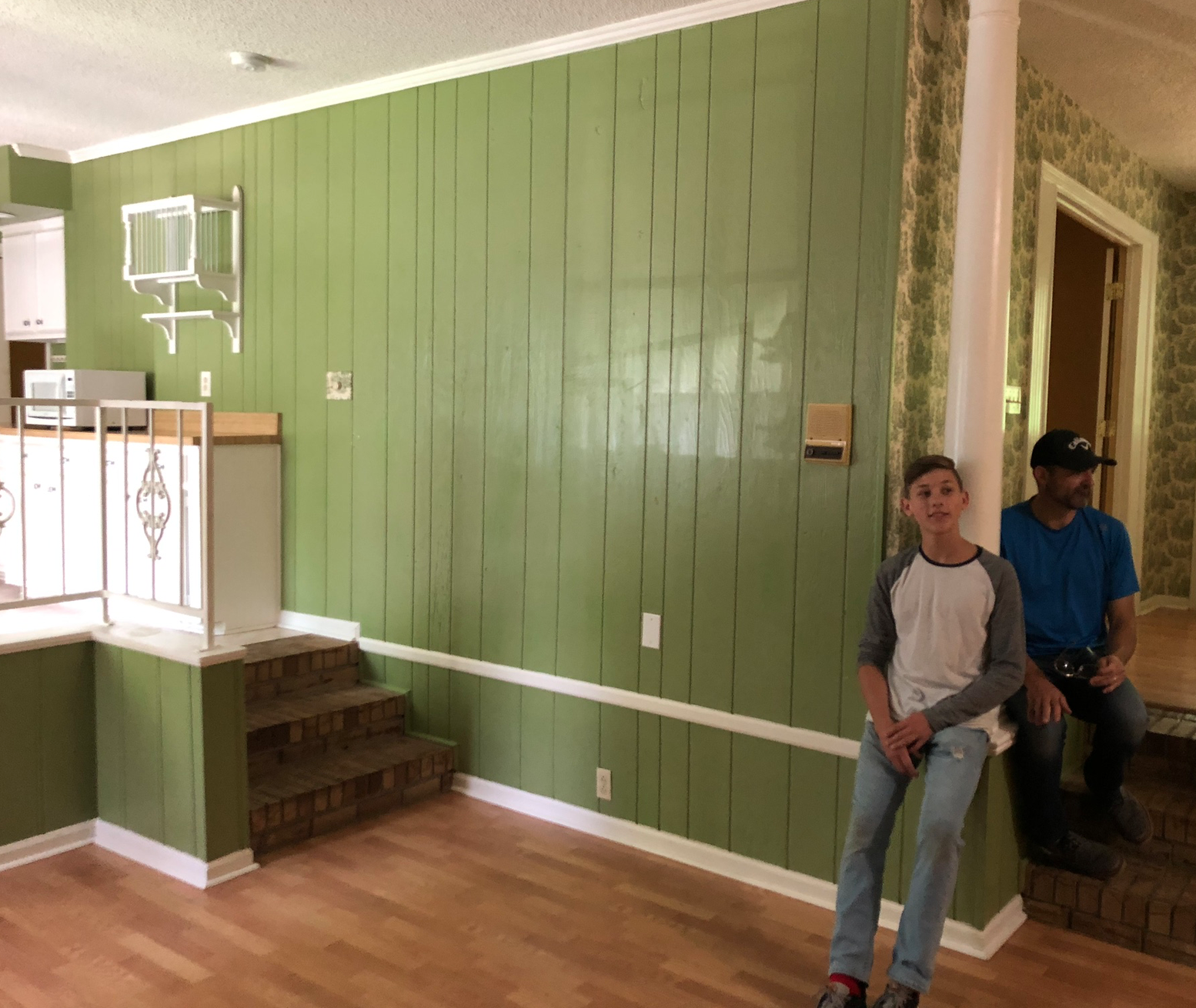 That wall was a wedge between those two spaces, and tearing it down would definitely open up the space and make our home feel larger. 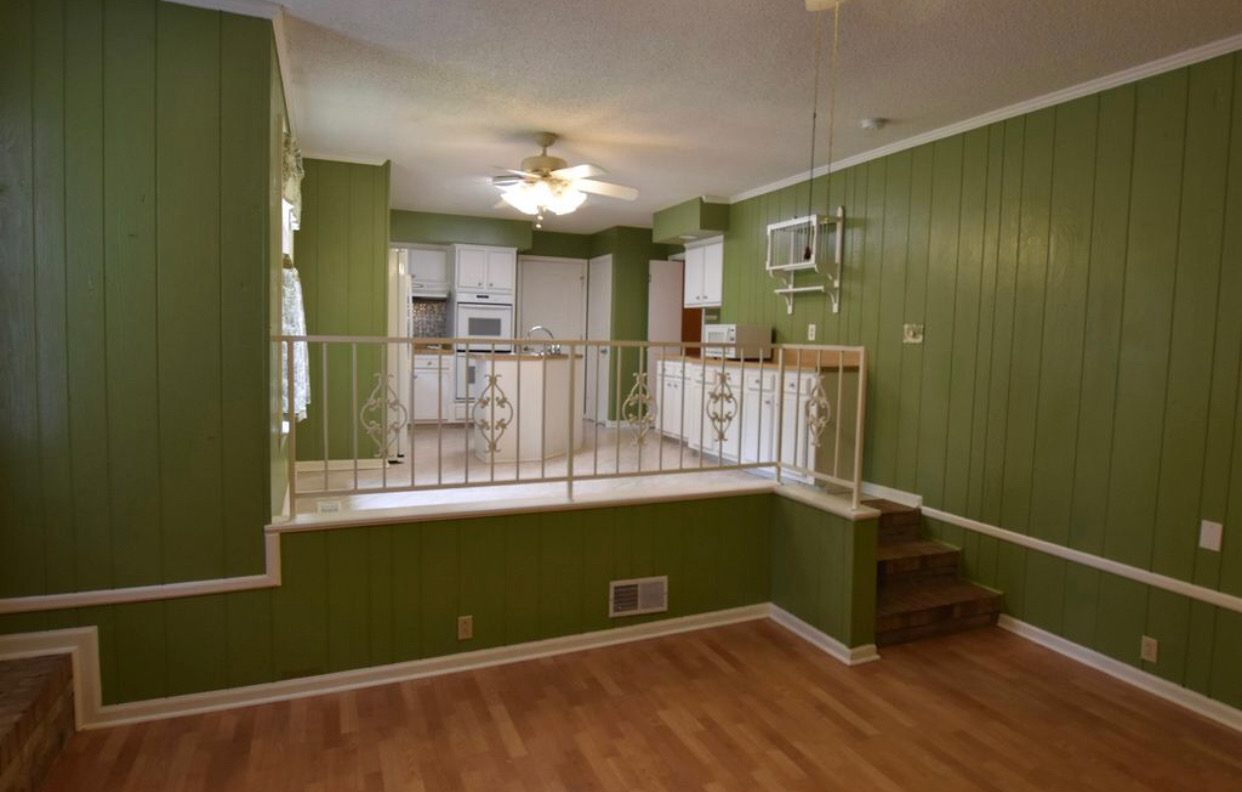 We KNEW that wall was going to have to come down ASAP!

So on our closing day, we went STRAIGHT to our new home and began doing demo.  The boys helped Cy get up all the old flooring throughout the house, and Cy began tearing out the kitchen. 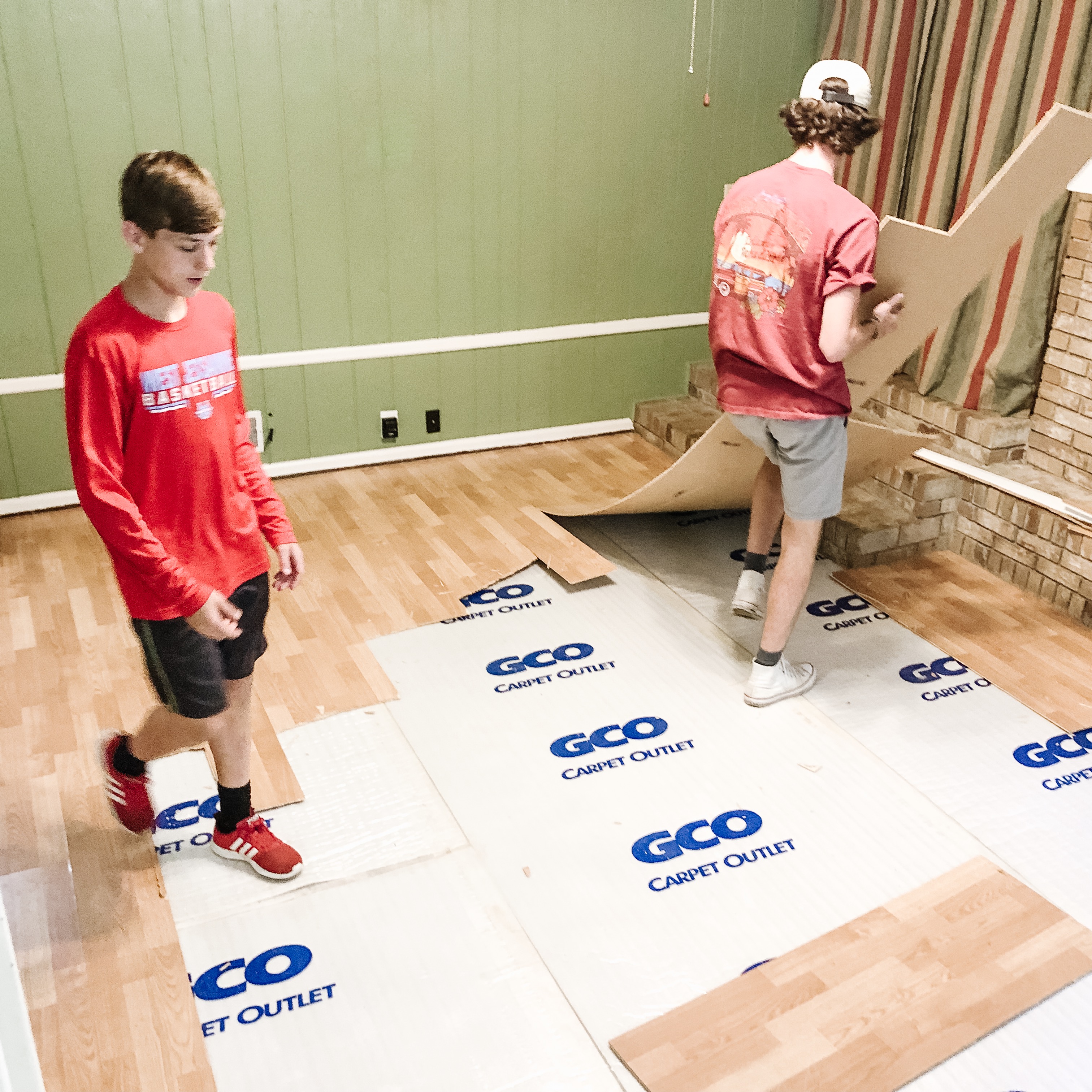 He tore out the old cabinets and removed the old appliances, and then it was time to start taking down the wall. 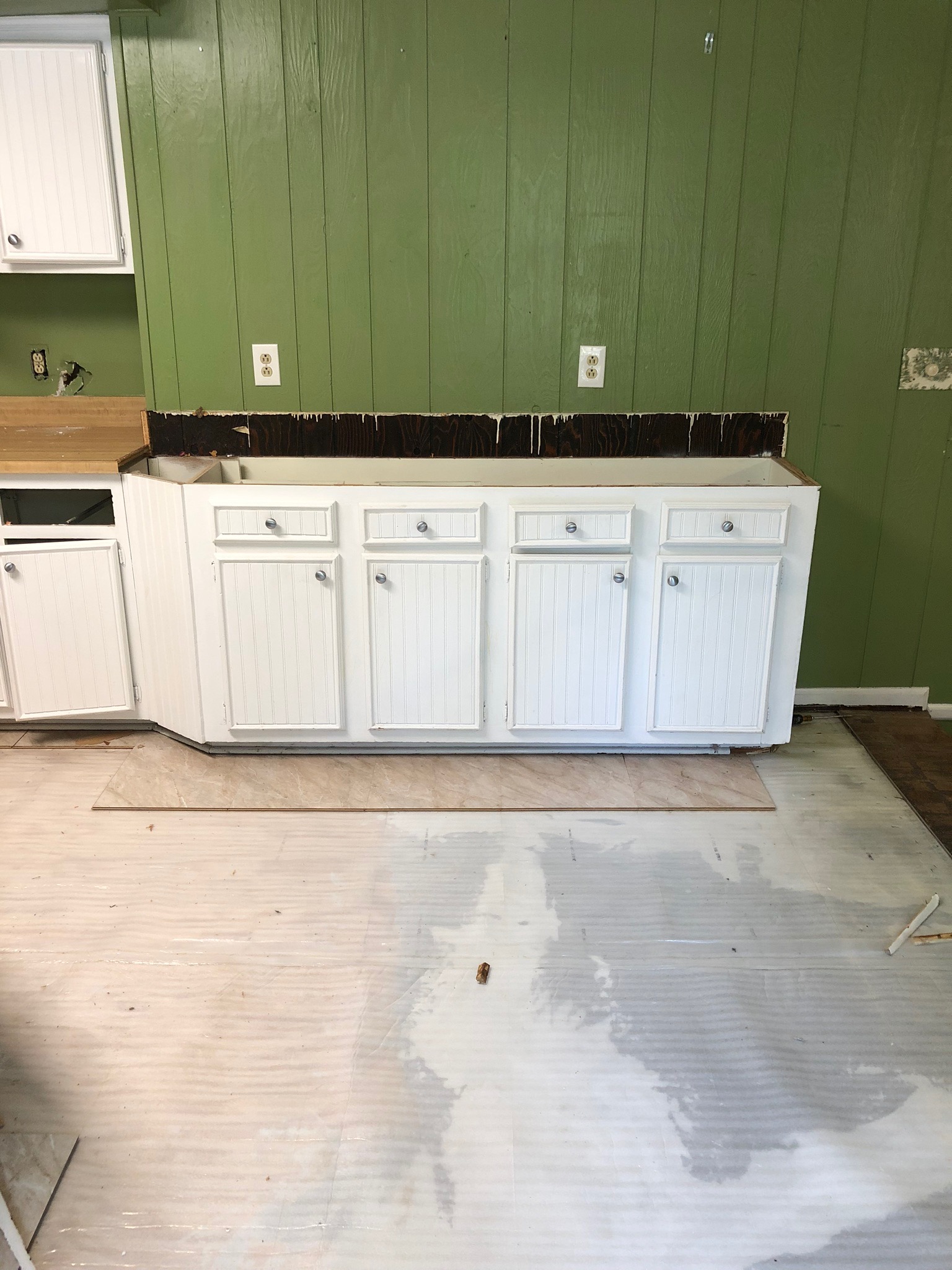 Tearing down the wall was the part I was most looking forward to!  I knew it would make a HUGE difference in the look and feel of our home once we removed it. 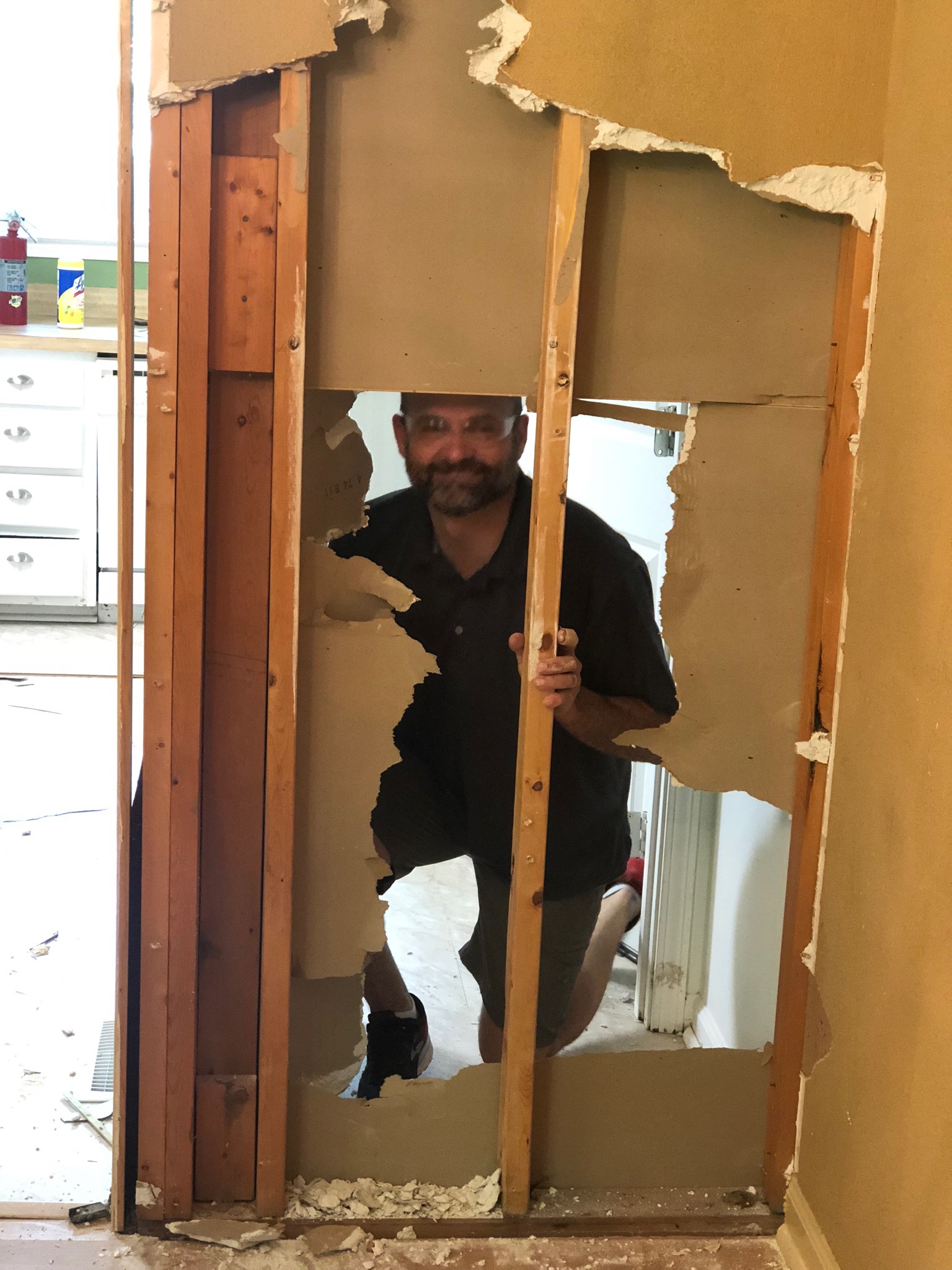 This process took a while because not only did Cy have to rip off the old drywall and paneling, but he also had to cut and remove all of the wiring in that area.  You guys, Cy said he has never seen so many electrical wires in his LIFE!  They had double and extra switches for everything!  He had to turn off the electricity and identify each wire and what switch it was connected to.  Then he had to label all the wires so we wouldn’t forget.  It was a loooong tedious process, but it had to be done. 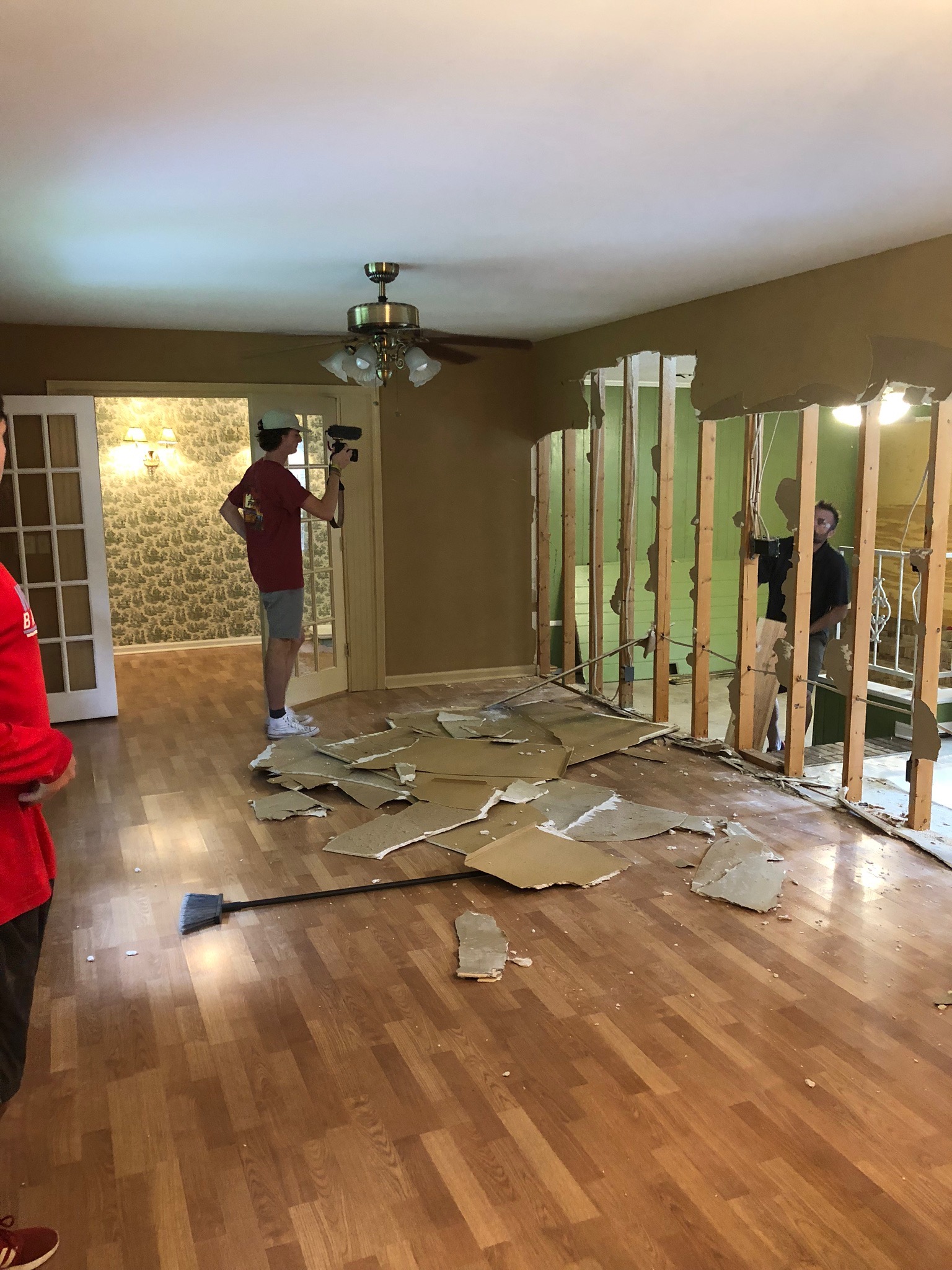 Once he was finished with the electrical, he was able to start tearing the wall down to the studs. 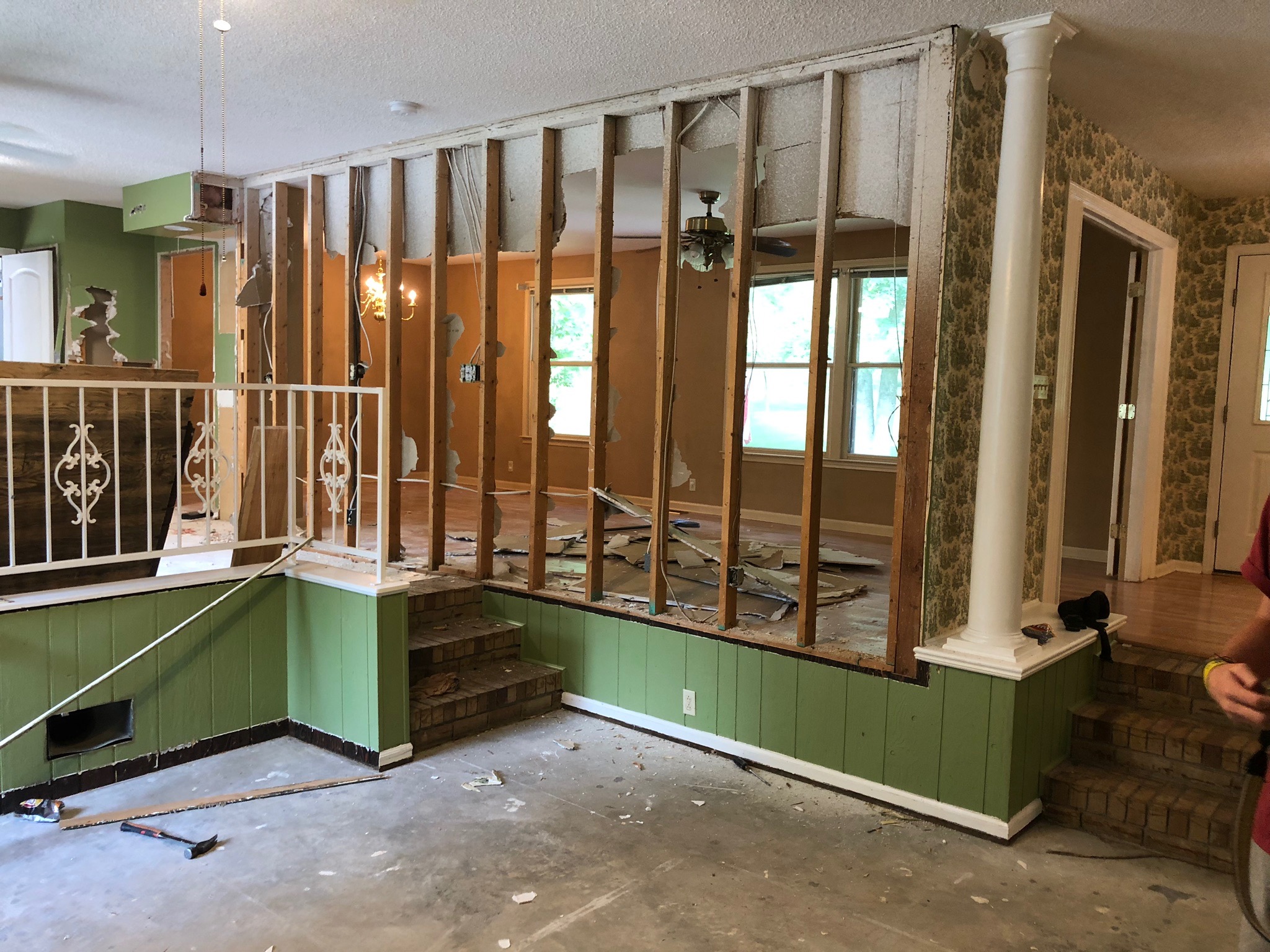 This is when it started to get fun!  I was loving how open and airy the house was beginning to feel! 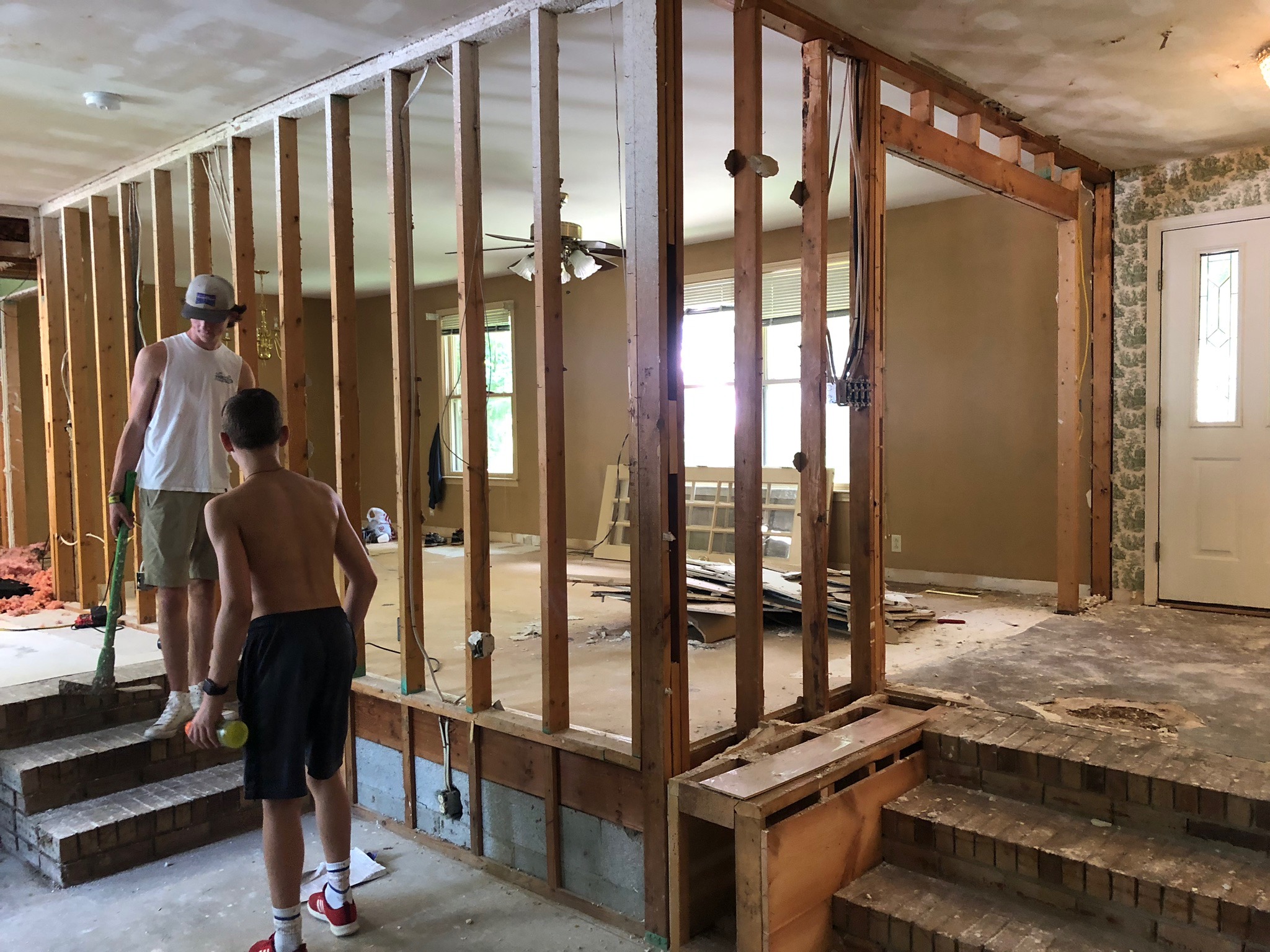 Since this was a load bearing wall, Cy had to reinforce the ceiling joists up in the attic before he could remove it completely.  Then one by one, the studs were removed. 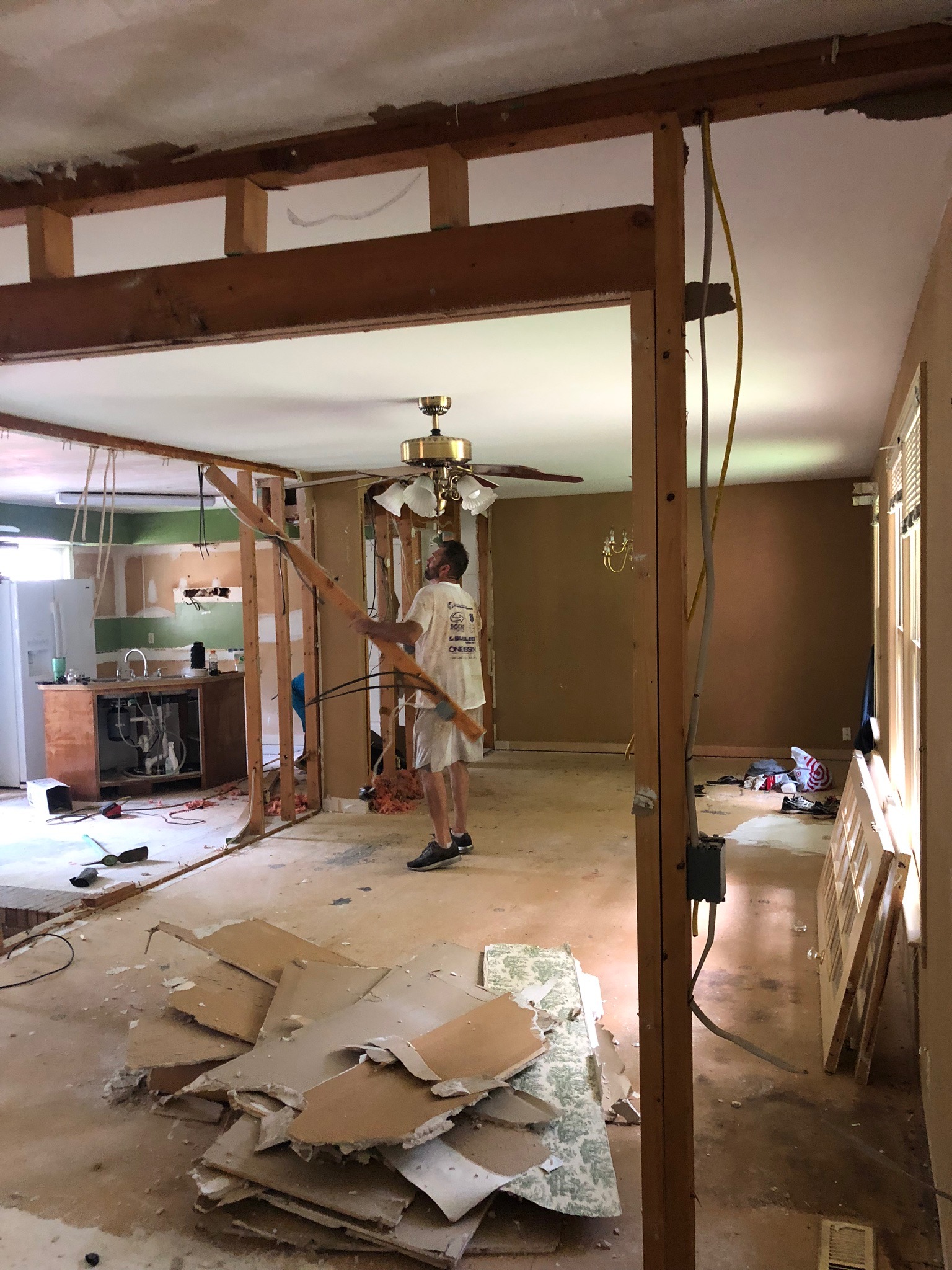 And all of a sudden, two rooms began merging into ONE open room… 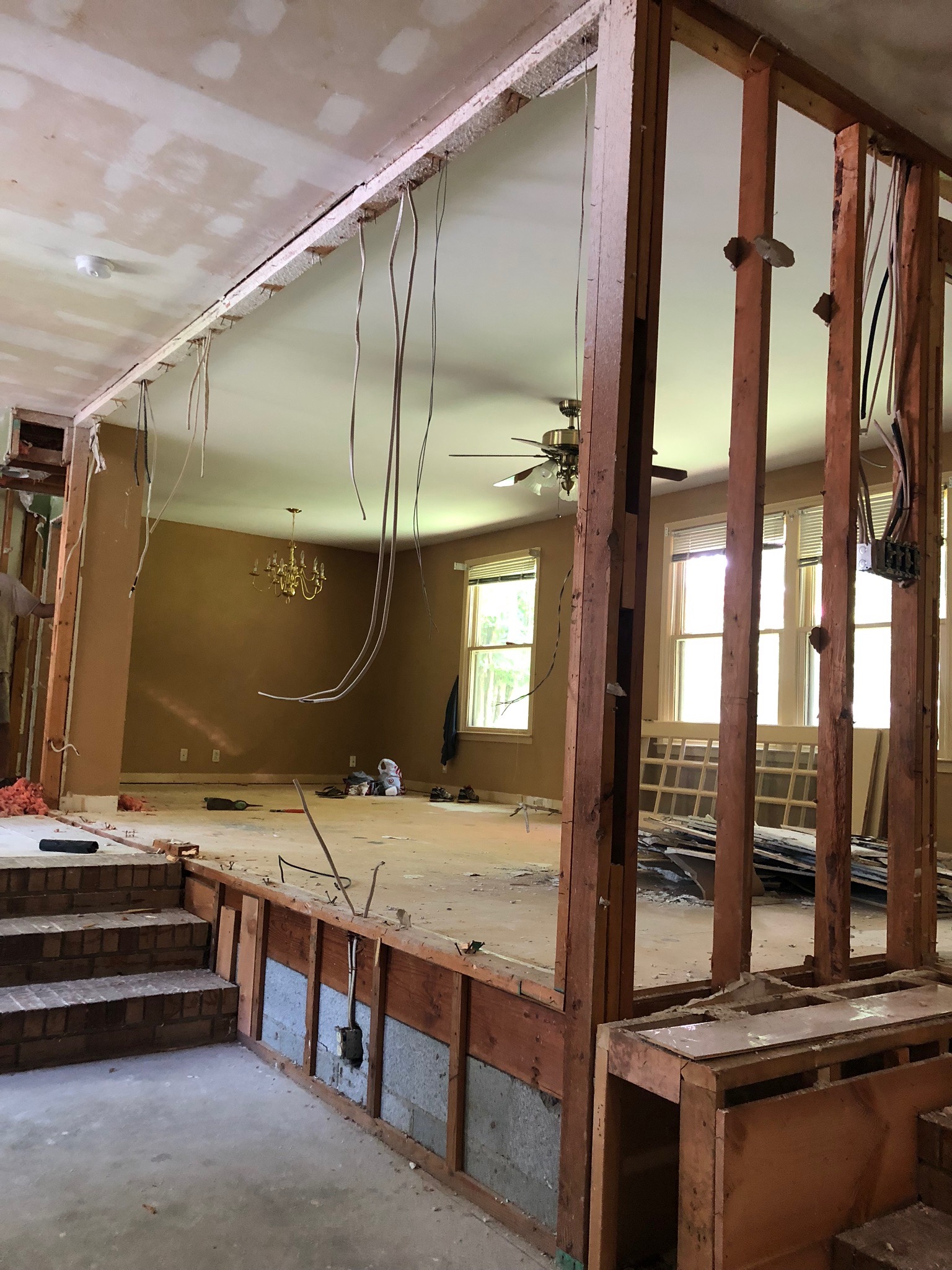 I was in LOVE with how it was looking!

Unfortunately, we hit a bump in the road when Cy began to remove the final stud, but you will have to wait until our next episode of Notes from Home to see what happens next!  :)

It’s  now time for Episode 3 of Notes from Home, 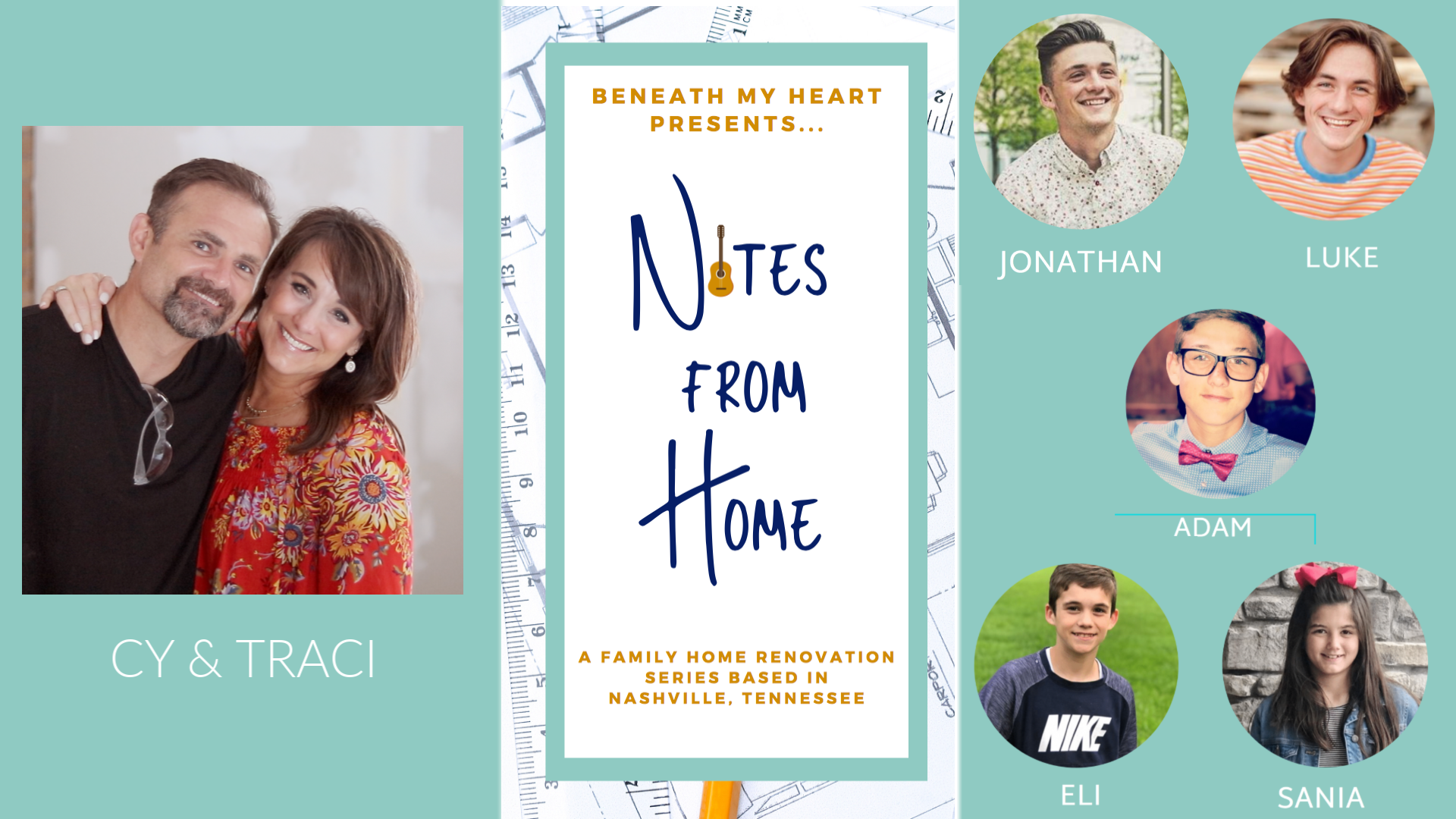 where we answer a lot of the questions we have been asked lately, like…

What are we doing?

When can you see each episode?

Where is our home located?

Why did we move to Tennessee? (Most asked question!)

How are we going to complete this renovation?

THANK YOU FOR ALL OF YOUR SUPPORT!!

« What about our Flip House in Kentucky?
Cy’s New Career! »