Something really special happened this week.

My 10 year old son, Jonathan, got his new hearing aids! 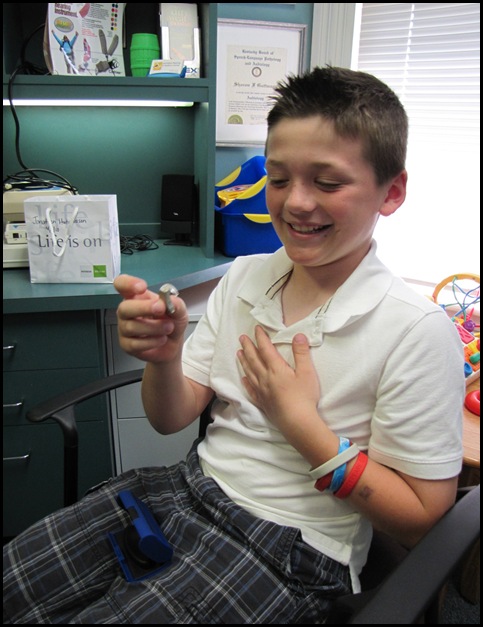 It was a very emotional day for me.

(I shared some of this story last year, and you can read about it HERE.)

My son, Jonathan, has moderate to severe hearing loss in both of his ears. He got his first pair of hearing aids when he was 3 years old. Since hearing aids are not covered by insurance, it has sometimes been difficult paying for his hearing aids and doctor’s appointments.

Mom always had a soft place in her heart for Jonathan. And she would sometimes help us out financially to meet Jonathan’s needs. She never wanted him to have less than the best care for his ears. 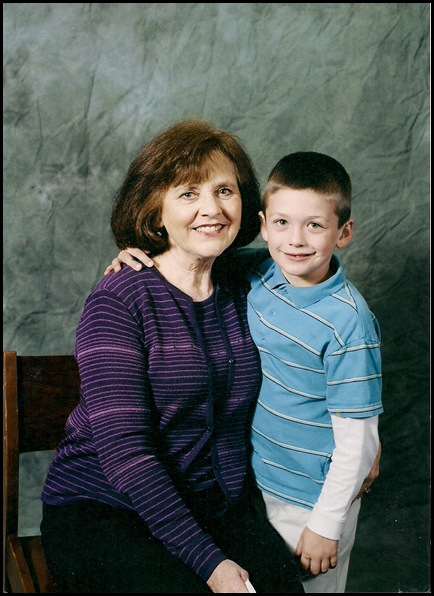 Last year, Jonathan was in need of some new hearing aids. The ones he was wearing were old and outdated. Knowing it would be difficult for us to purchase new ones, Mom told me she wanted to save up the money to buy Jonathan some hearing aids.

It was last Spring when Mom started saving money for the hearing aids from her paychecks as a church secretary.

It was around that same time that Mom started to not feel very good. She went to the doctor and was diagnosed with a heart condition. (We now know the cancer was there and was making her not feel good, but it had not been diagnosed at this point.)

We encouraged Mom to quit working and take it easy for a while, and her answer was always the same…. “I’ll quit working in the fall…when I have enough money saved up to buy Jonathan some new hearing aids.”

And believe me, there was no talking her out of it! Mom was determined to get those new hearing aids for Jonathan!

You could see the joy in her eyes when she would talk to Jonathan about getting his new hearing aids. And he was so very excited!

Mom was diagnosed with cancer on August 6, 2009. She was given 6 to 12 months to live. The news was absolutely devastating to us all.

But what was even more devastating to Mom was that she wouldn’t be able to buy Jonathan his new hearing aids.

Her eyes would well up with tears when Jonathan would come around, and she would apologize over and over to him for not being able to buy him new hearing aids. Of course, sweet Jonathan would say, “That’s okay, Nana, my hearing aids are just fine.”

But it bothered Mom. It seemed to bother her even more than the cancer.

Mom had saved up $1700 for his hearing aids when she found out she had cancer. That was almost half of the total cost.

And her heart broke the day she had to transfer that money into her checking account to pay for her own medical bills related to her cancer.

Mom always liked doing things for others more than for herself.

After Mom passed away, Dad moved in with my sister and brother-in-law. He didn’t want to live in his house without Mom. He just couldn’t.

Dad put their house up for sale about a month later. It was a very difficult thing to do.

However, without hesitation, Dad told me when the house sold, the first thing he wanted to do with the money he made was to buy Jonathan his new hearing aids.

He said, “Wanda would have wanted me to.”

And he was right.

When Mom and Dad’s house finally sold a couple of months ago, Dad told me to call and make Jonathan an appointment to get his new hearing aids.

And Monday was that special day! 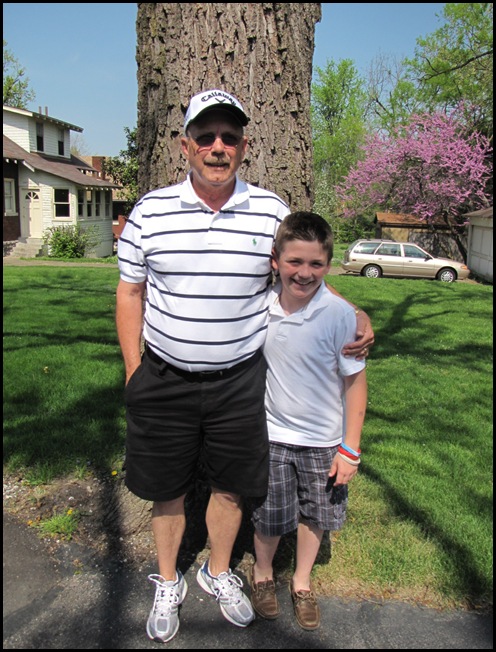 Oh, Mom, you would have been so proud of Dad!

To say that Jonathan was excited would have been the understatement of the year!

Here he is with his wonderful audiologist, Amy. 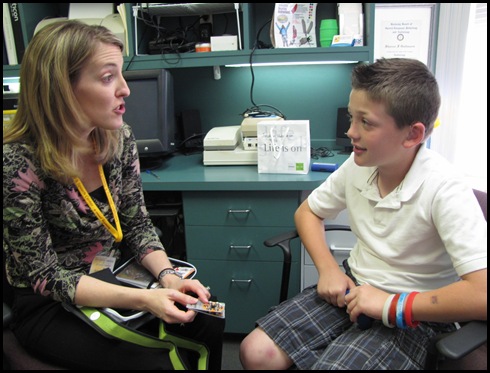 I could feel Mom’s presence in that room that day. And I could see her smiling from ear to ear, clapping her hands in excitement! 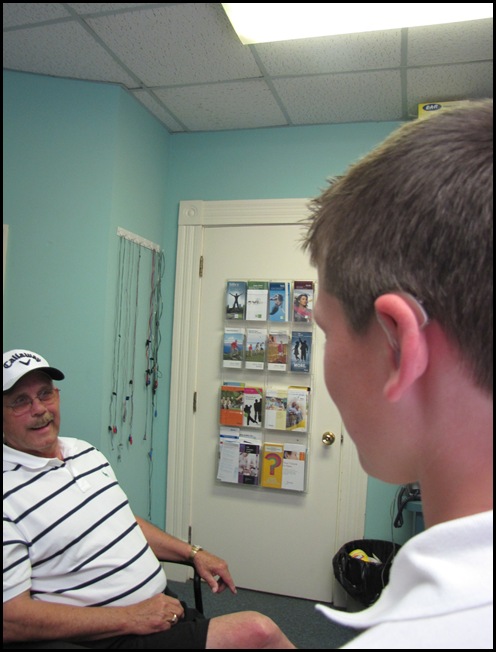 And I could hear her say, “Thank you, Doug, Thank you!” What an honor it was for Dad to stand in her place that day and fulfill her dream for Jonathan!

Jonathan’s new hearing aids are “top of the line”, and he is now able to hear things he has never even heard before…like the air conditioning kicking on, the taps of a keyboard when typing, mommy whispering to daddy in the front seat of the car… :)

He now says in a sing-song voice, “I can hear you!”

What a blessing! (right, Mom?)

So now I say with joy, as loud as my heart can say it… 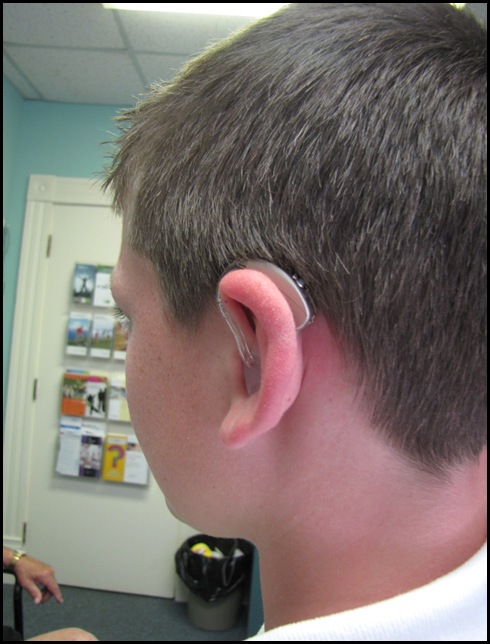 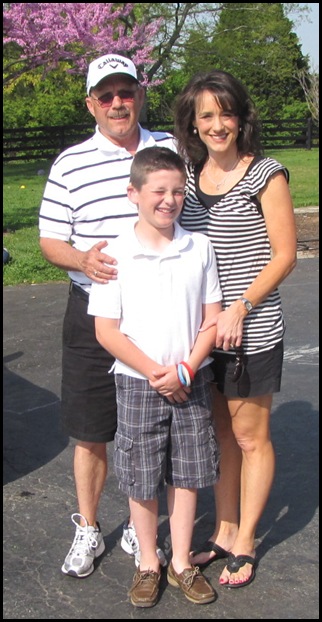 I also wanted to share with you a note that Jonathan wrote Mom about a month after we found out she had cancer. This was his “rough draft” that he had tried to edit at school (thus, the circled words). The final copy that he gave to Mom is somewhere in a box at my sister’s house.

I hope you can read his writing. You may be able to click on the picture to enlarge it. 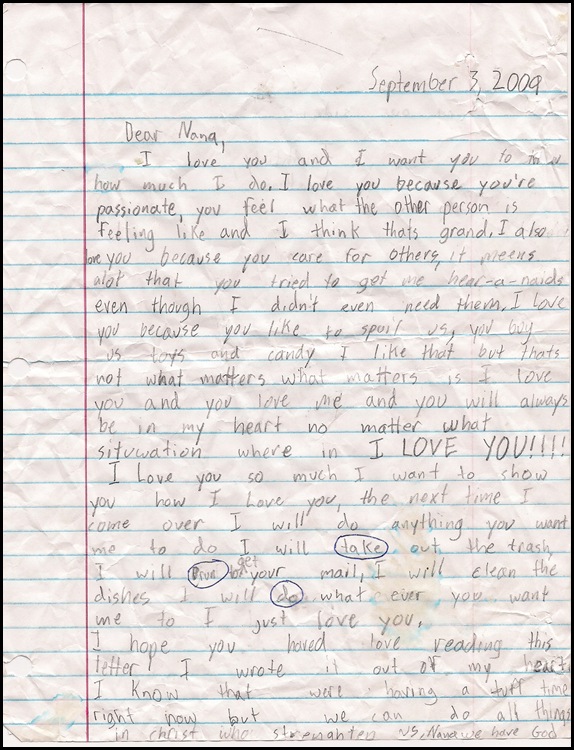 God is still on our side! Loving us through the storms of this life!

Jonathan sang a version of “Amazing Grace” at Mom’s funeral. She had asked him to.

He had sung it a few months earlier at his school’s talent show, and Mom was there to watch it. She was always so proud of Jonathan’s ability to sing…a true gift from God.

Mom had no idea that day as she sat and listened to Jonathan sing “Amazing Grace” that a few months later he would be singing it at her funeral. It always blows my mind to think about that.

Life is so short. And it is only what we do for Christ on this earth that will last forever! Amen?!

I didn’t tape Jonathan singing at Mom’s funeral, but he sang again at our church a few weeks later. If you missed it the first time, I wanted to share it with you again.

Mom, Jonathan’s still singing for you…

Thanks for letting me share the JOY beneath my heart,