Well, that is a title I for sure never thought I would write!

But it’s the truth.

On February 9 and 10th, Luke will be undergoing two surgeries on his brain at Vanderbilt hospital.

If you follow me on Instagram, you probably already know this.  If not, I will explain the crazy events over the past few weeks.

When Luke was home for Christmas break, he experienced what we thought was a massive migraine on December 29th.  None of my children or I have ever experienced migraines, but I have friends who have, and they have shared how debilitating they can be.

Luke’s headache came on suddenly, it made him nauseous causing him to vomit, and he was unable to function normally.

We took him to the doctor the next day, and as you could see, he was in too much pain to even sit up. 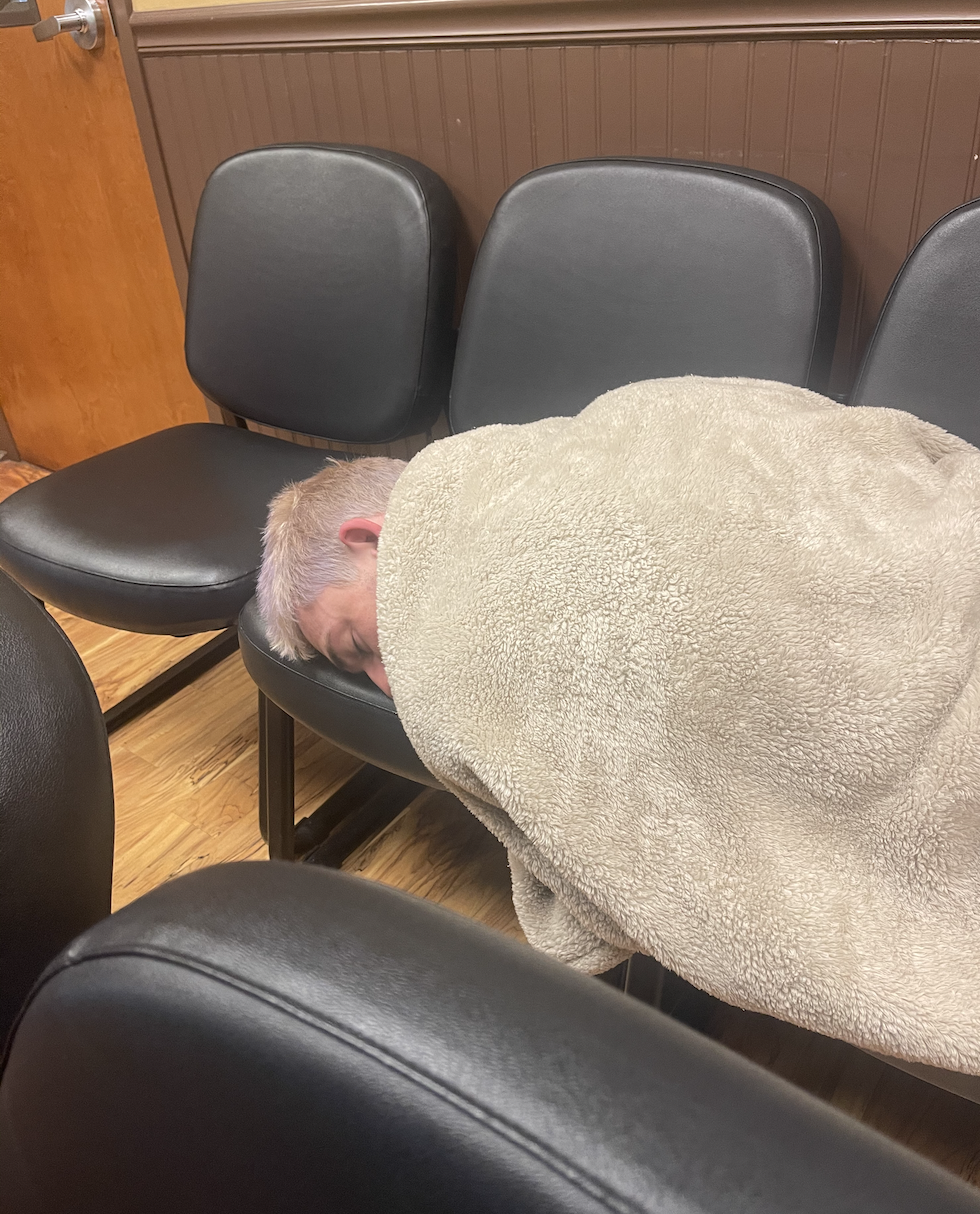 They did blood work and assessed his vitals, and agreed that it may be a terrible migraine. 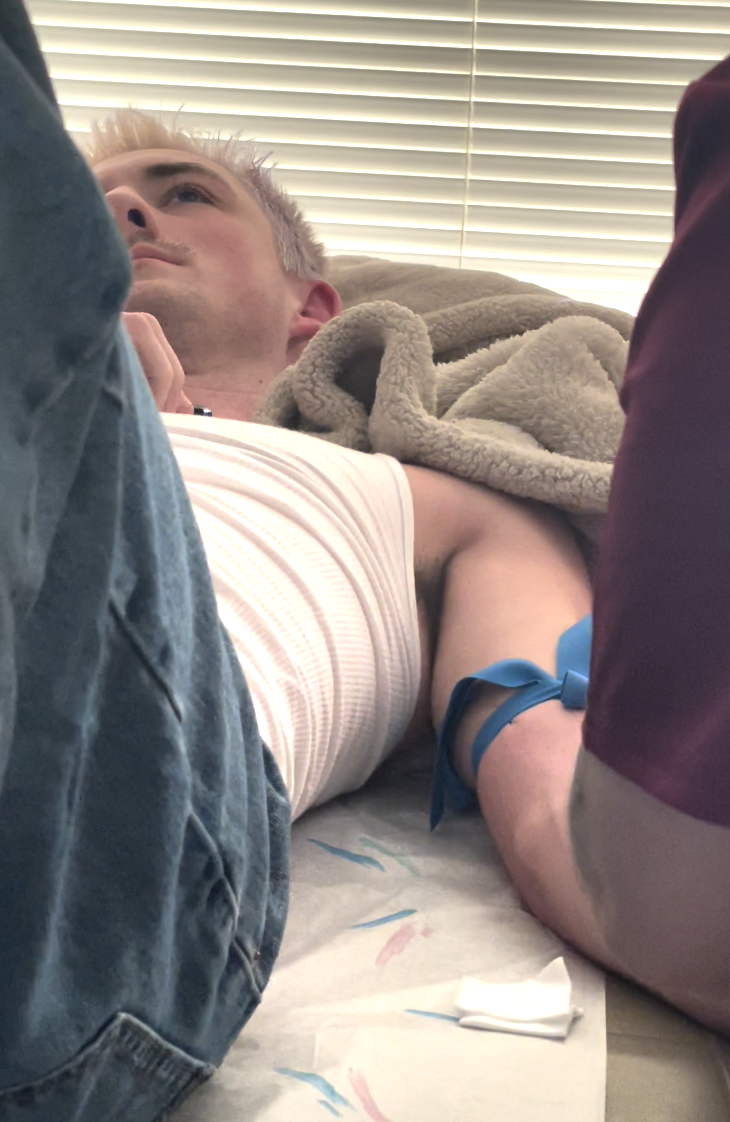 They gave him a migraine shot and some pain relievers.  It helped to take the edge off, but his migraine still persisted.

For the next few days, I continued to take care of Luke throughout the day and night, giving him pain meds and keeping cold packs on his head.  He slowly started getting a little better but on a scale of 1-10, (10 being worst) he was still a 4/5.

On January 6, he was scheduled to fly back to LA, were he is currently living, and by that time, he said his head pain was a 2-3 or 3-4.  Since we were seeing improvements, we thought he would continue to get better.

However, his headaches never fully went away, so we ordered an MRI for him in LA.  He had it done on the morning on the 19th.  That evening, we were just hanging out watching tv and actually making s’mores in our fireplace when we got the call that wrecked us.

The radiologist in LA sounded very concerned and told us that Luke had a lesion on his brain.  He said he didn’t know what it was, but it may be a tumor or blood, but Luke needed to be seem immediately.  (The radiologist was actually very rude and insensitive about the whole thing, which didn’t help.)

He sent us pictures of Luke’s scan, and we were shocked.  We truly couldn’t believe what we were seeing and hearing.

We called Luke and calmly told him the situation, and told him we were flying him home immediately.   We knew that whatever was on his brain had been there for several weeks, and that he had slowly been getting better.  The morning of the MRI, he said he had zero pain in his head and zero headaches.  We actually almost cancelled the MRI, but decided to keep the appointment.

So we felt confident that Luke would be fine to fly home that night.  He got a flight at midnight in LA and was back home in Nashville by 6:00 that morning.

We then took him to our doctor that advised us to go to the Vanderbilt hospital emergency room.

They admitted him that morning, and began doing testing on him immediately.

Although my nerves were a wreck about what we might find out was on Luke’s brain, Luke felt perfectly fine, which made it easier for me.  I was able to sit with him, (in the hallway because no rooms were available,) and he would spend time texting friends and reading his bible.

This boy,  y’all.  He has my whole heart!  He’s one of the funniest, most loving, most thoughtful, most Christ-seeking boys you will ever meet! 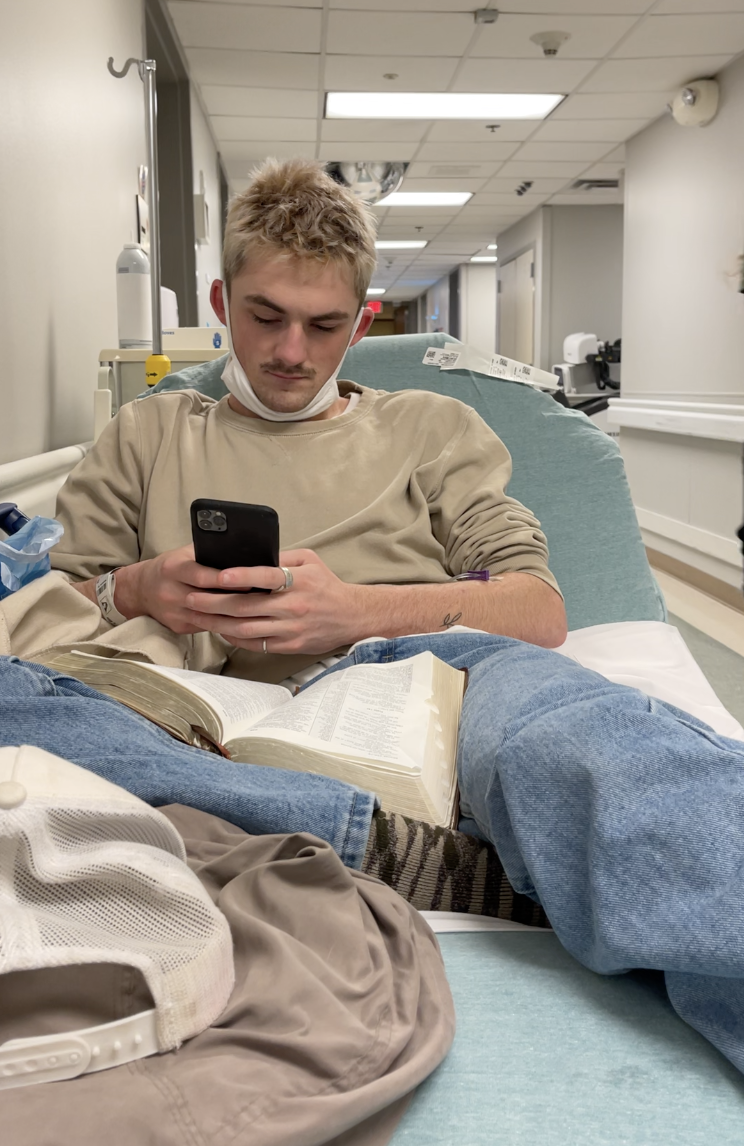 They did a CT scan on his head, one on his body, and another MRI of his brain.  And then we waited.

Luke said that he heard some of the doctor’s discussing whether it was a brain bleed or a small mass.  One said they definitely saw a mass, which was terrifying to hear.

But late that evening, Dr. Reed Thompson (PHENOMAL Neurologist at Vandy!) came to us and went over the results of what they found.

We got the best news ever….the did NOT find a tumor!!

What first looked like a tumor, they were able to closely identify it in the CT scan as an AVM.  The picture below is the information the doctor drew for us to explain everything. 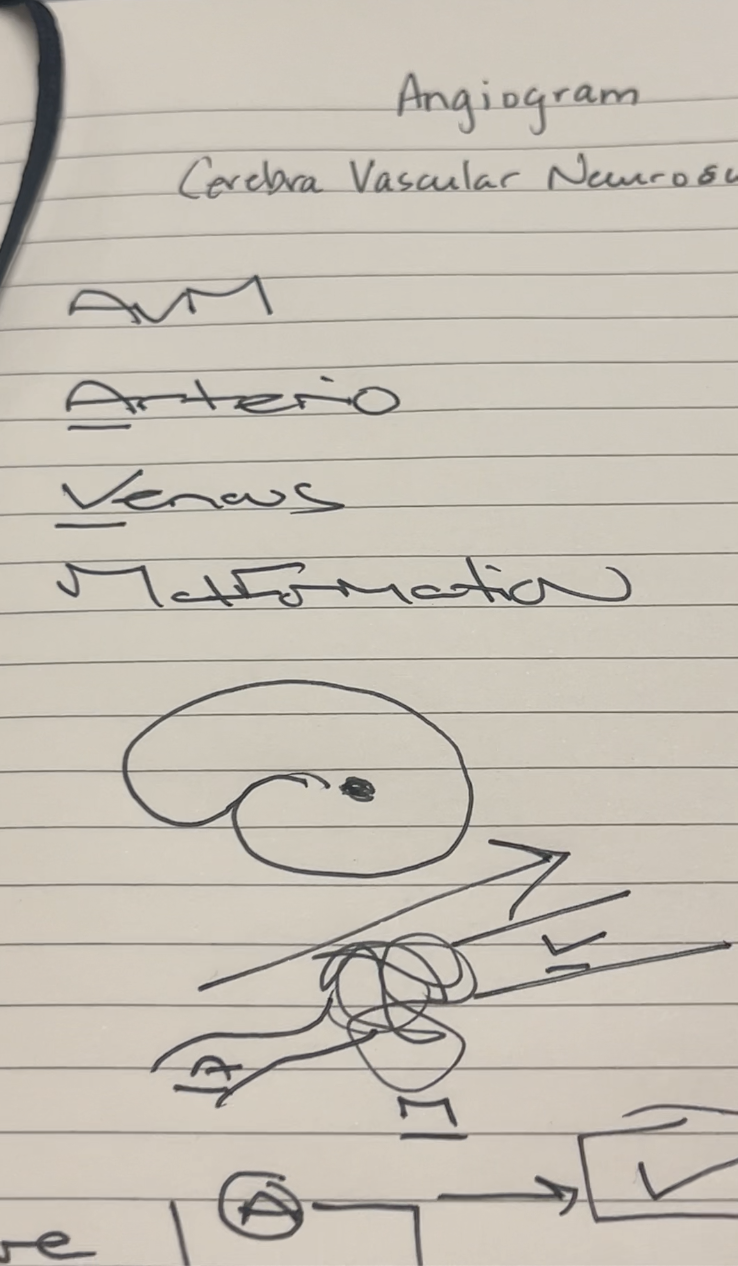 An AVM stands for ArterioVenous Malformation.

A quick search about the seriousness of an AVM makes me realize how fortunate we are that Luke survived the initial hemorrhage and is doing well. 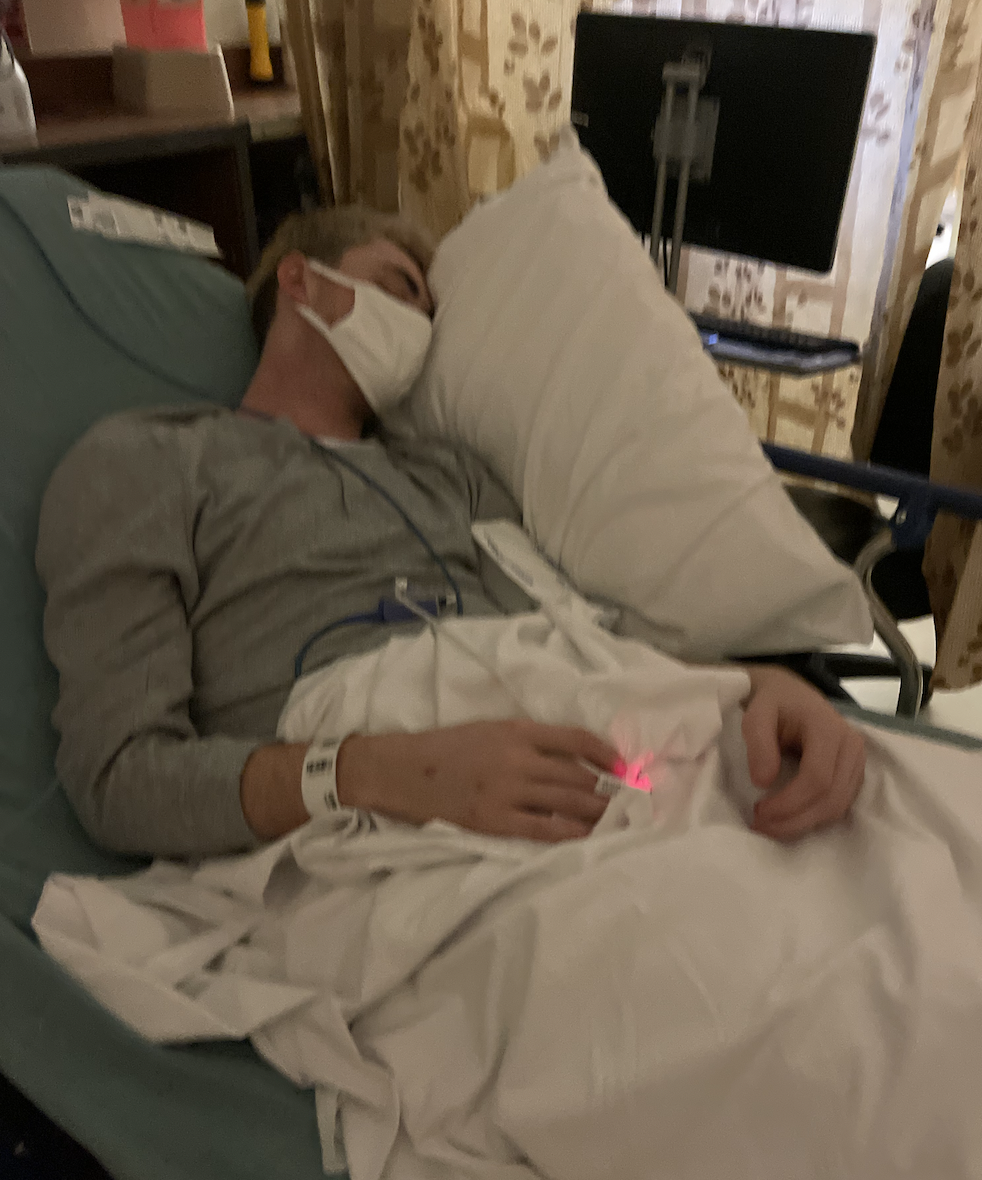 We stayed the night in the hospital, and unfortunately, were still unable to get our own room, so I had to sleep in the chair below. 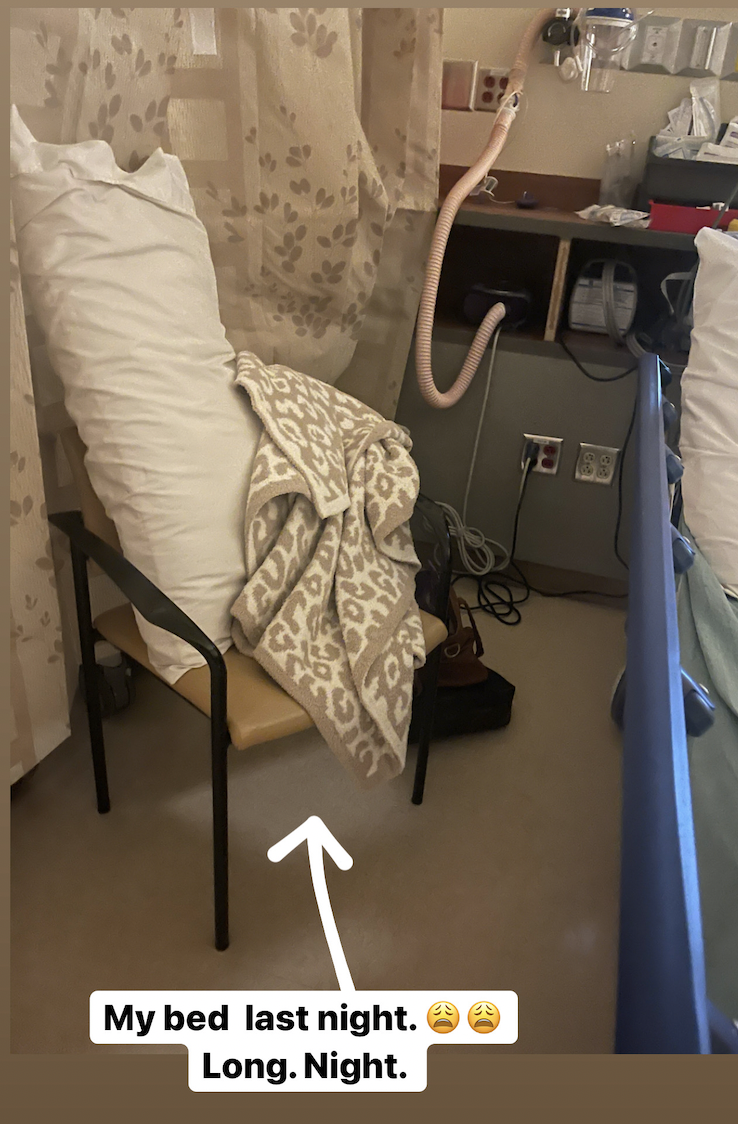 But of course, I would have slept on the floor or stood up all night long to be with him!  I wasn’t leaving his side.

The next day, they did an angiogram on him to get a closer look at the AVM and make plans for next steps.

That evening we were able to go back home and felt very thankful for the wonderful doctors at Vandy.

Well, Luke has to have the AVM removed so it doesn’t hemorrhage again in the future.  He goes back in the hospital on February 9th for an Embolization (basically glues the AVM together to prep it to be removed.)

On February 10th, they will make an incision in his skull and remove the AVM.  They said we will be in the hospital 2-5 days, and then he will have a 4-6 week recovery.

Although I wish it was under better circumstances, I am truly enjoying this extra time with Luke right now.  He is so precious and has stayed so positive through this whole thing.

I will keep you posted about the surgery next week, and I would be so honored if you would pray for Luke, the doctors, and our family.   There are all types of emotions with surgeries like these, so I am praying for God’s peace to comfort and guide us. 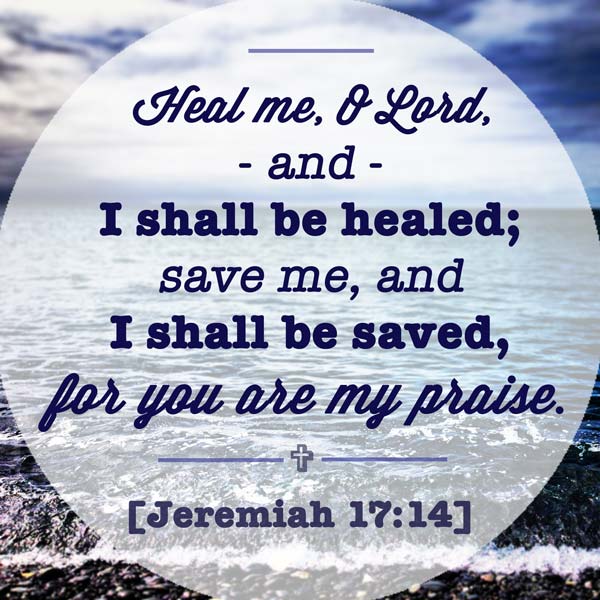