WARNING:  There is a somewhat graphic photo of Luke’s surgery scar toward the bottom of the post.  I don’t think it is too bad, but if you are extra sensitive to stuff like that, just scroll by quickly. haha!!

It has been a whirlwind of a few weeks, for sure!

Luke had his brain surgery, and we are so thankful that everything went well!!!  But I wanted to share a recap of his surgery with you here on the blog because you all have been so supportive and kind through all of this. Your prayers and thoughts were felt and appreciated more than you will ever know!

Luke and I arrived at 6:30 am on Wednesday, February 9th to Vanderbilt Medical Center’s neurology department.  He was scheduled for an angiogram/embolization at 8:30 that morning.  This is the procedure where they would go in through a vein in his wrist, all the way up to the AVM in his brain and basically “glue” the blood vessels shut.  They do this to lesson the amount off blood flow during the removal surgery the following day.

Here is Luke before that procedure.. 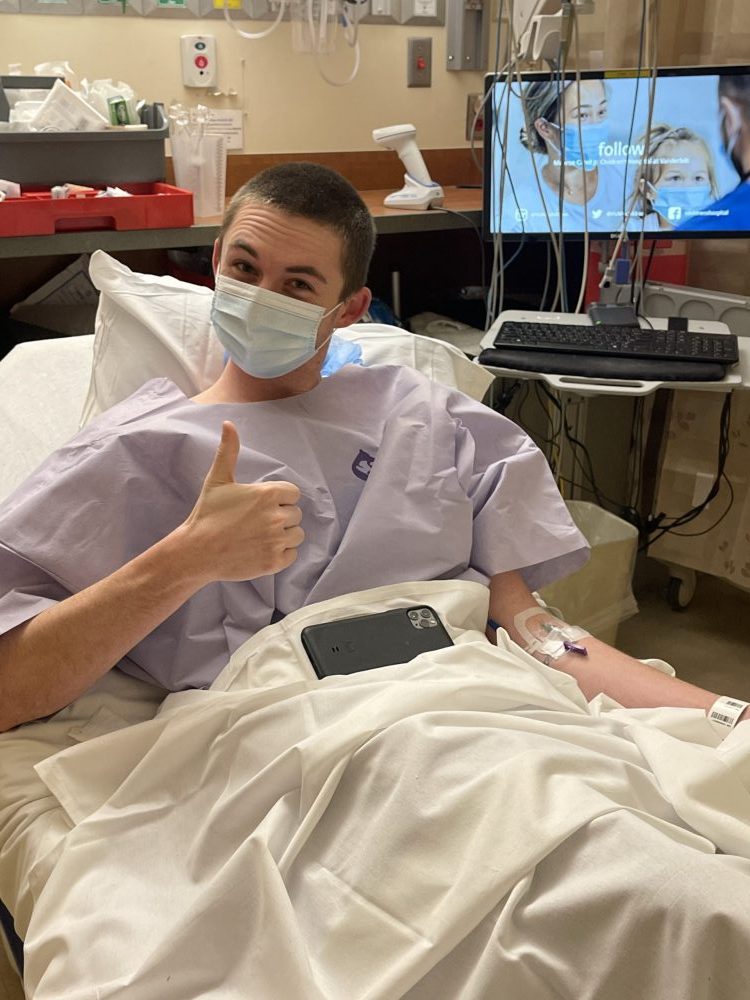 This kid is always so positive and happy!  He’s always looking on the bright side of things and makes us all laugh even during stressful moments.

That procedure took about three hours, and it went well.  However, the doctor informed us that they were not able to get ALL of the blood vessels glued shut like they had hoped.  He also informed us that some of the large blood vessels were connected to the motor part of his brain which would make removal of the AVM a little trickier.    All that being said, they felt that they were in a good position to do the surgery the following morning and told Luke to get some rest. 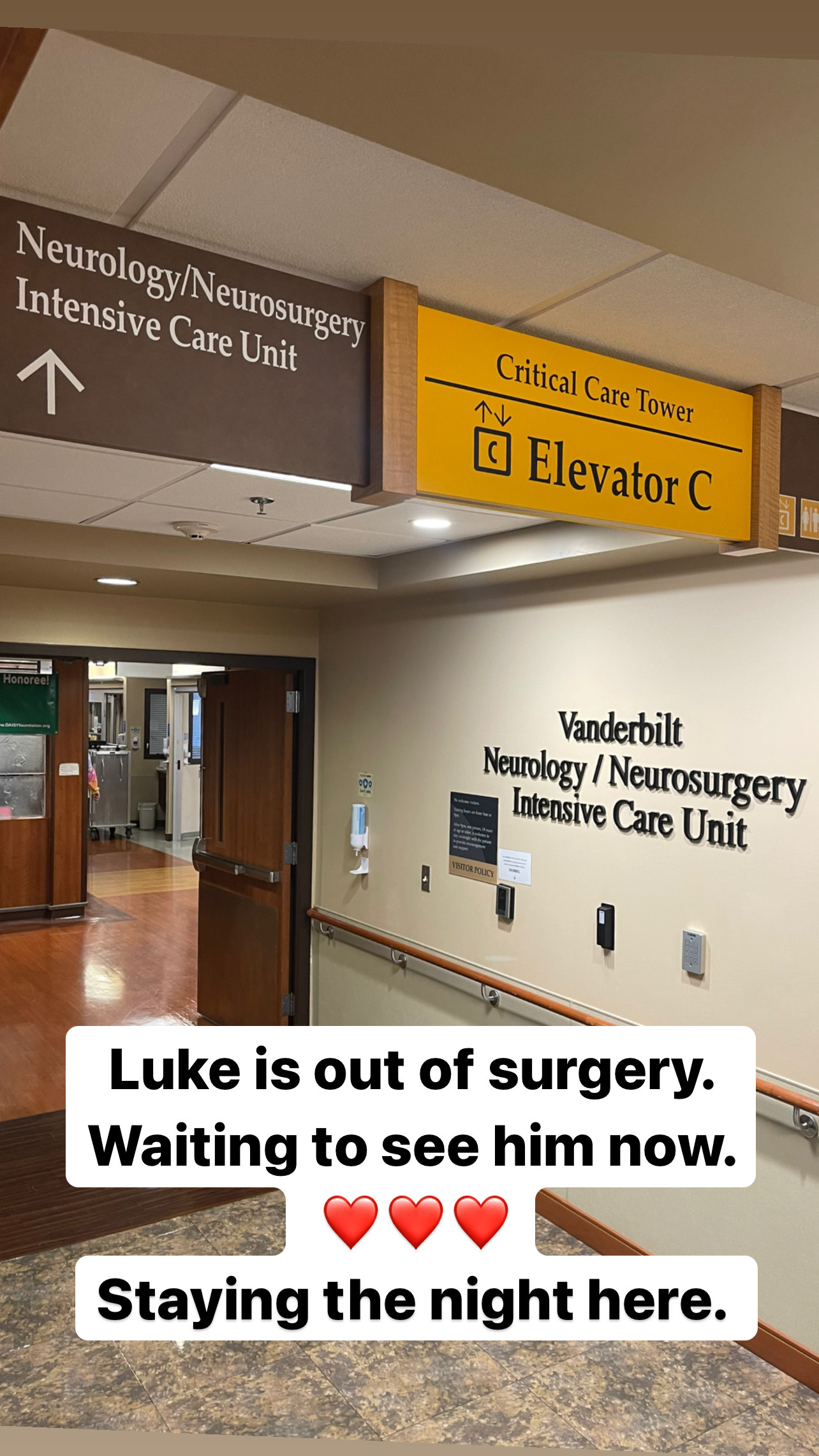 Cy was working and watching the rest of the kids at home, but was going to join us early the next morning for Luke’s big surgery.

Luke was feeling pretty good and in good spirits, but all the IV lines going in to his arm was uncomfortable.  He had one in the other arm as well. 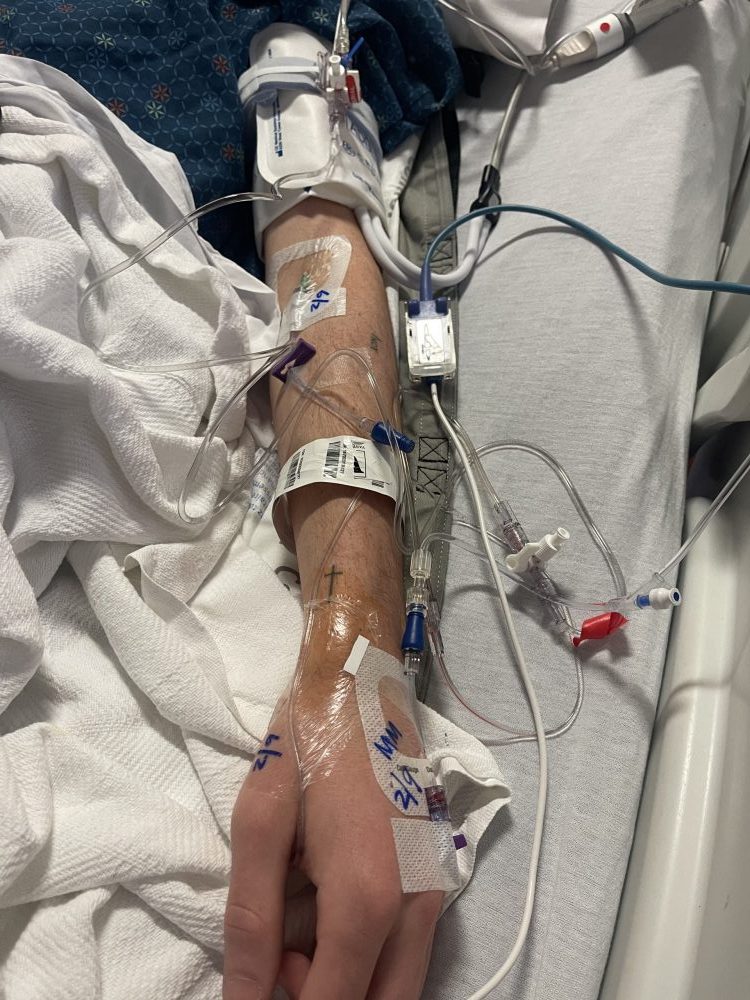 Those moments with him in the hospital are ones I will never forget.  Just me and my boy.  Good conversations and precious memories.  Moments like those are when nothing else seems to matter.   I was soaking up every second with him.

My nerves were pretty high, but as moms, we put up a brave front for our kids.  I slept in his room the night before the surgery, but didn’t sleep very well.  I was battling my mind as it went back and forth between feelings of worry and feelings of Peace.   I had to continually surrender Luke to the Lord and lay him at His feet.  And God was so faithful to be near us both right there in that hospital room.

Around 5:00 the next morning (Thursday,) one of the nurses from the Neuro team came in with new consent forms for Luke to sign.  They had added Dr. Reed Thompson to the surgery team.  Dr. Chitale was scheduled to do the surgery, and they added Dr. Thompson.  So we had the two top neuro doctors at Vandy working on my son’s brain.  I was relieved to know that, but of course worried as to why they added a second doctor?  Was Luke’s surgery going to be more difficult than they originally thought?  Was Luke at a higher risk for complications?

Again, this mama’s brain began to worry, and I had to keep praying and asking God to give me peace.

They came and got Luke a little earlier for his surgery that morning, and I was afraid Cy wasn’t going to get there in time, but I was so relieved when I saw him walking down the hall. 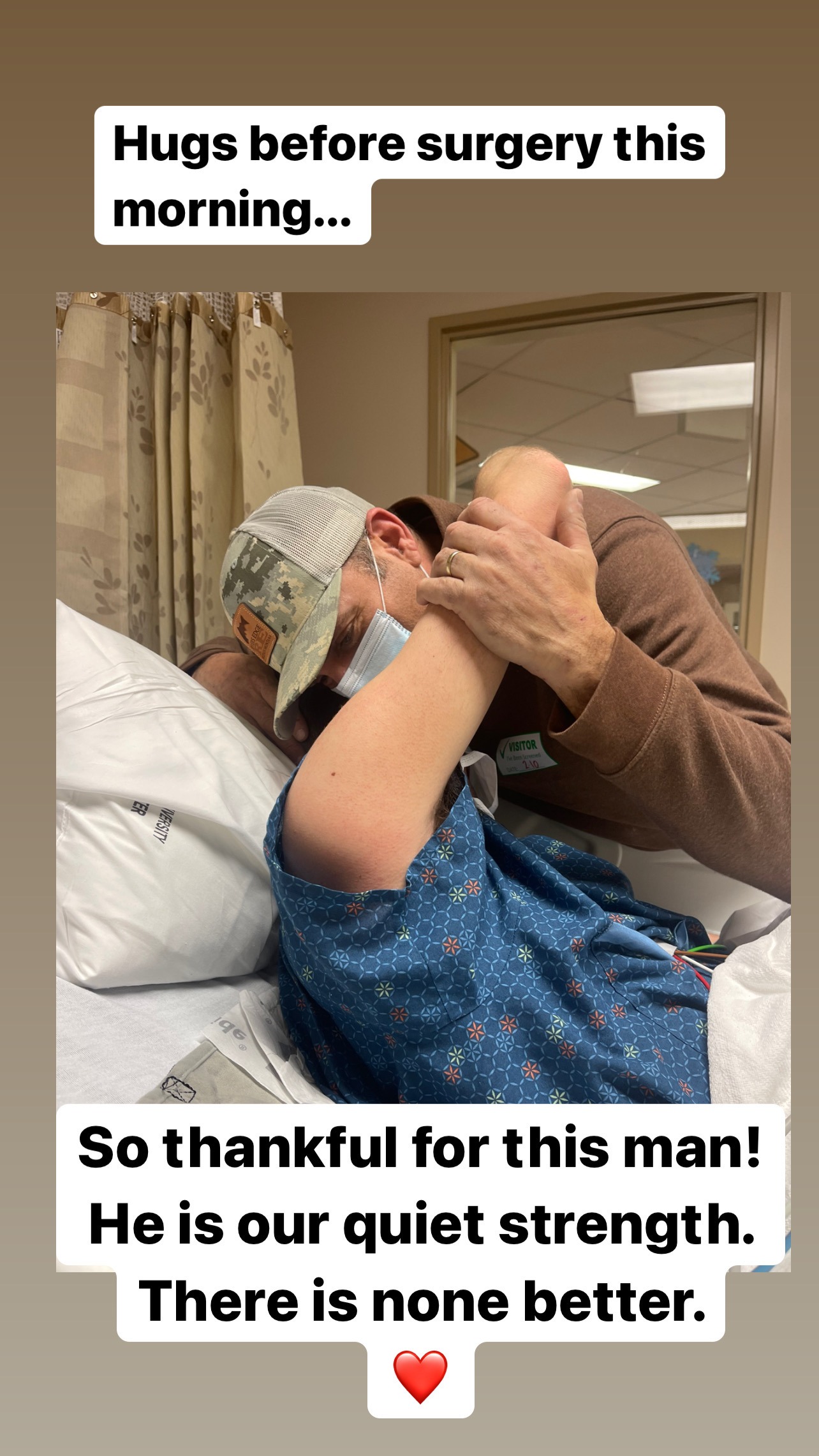 My stomach was a nervous wreck, but I felt so much better having Cy there with me, and so did Luke.  Cy is our rock and strength here on earth.

I could tell that Luke was a little more quiet, probably a little more nervous.  The reality of knowing that doctor’s would be cutting into his skull had to be a lot to digest.

(They marked the side of Luke’s head that his AVM was on.) 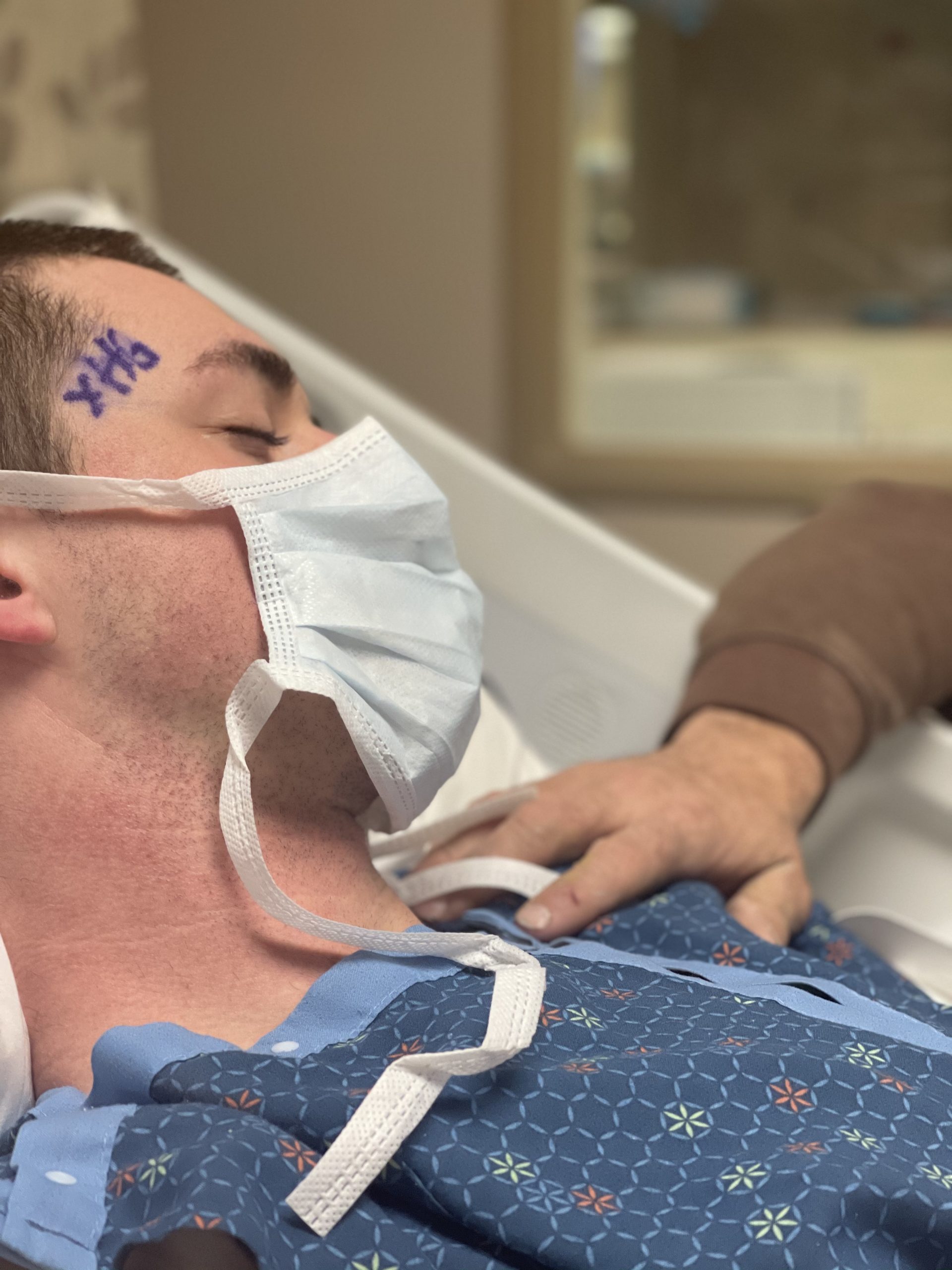 The few moments before they wheeled him off to surgery were the hardest for me to hold it together.  I was fighting back tears and swallowing extra hard to try and keep my brave face on for Luke.

And then I looked up to see Cy with his hand on Luke’s head praying over him, and the tears began to flow.   At that moment, I felt like I could have gone into a full-on loud ugly cry, but I held it back.  I wiped the tears from my eyes and tried to put on a smile for Luke. 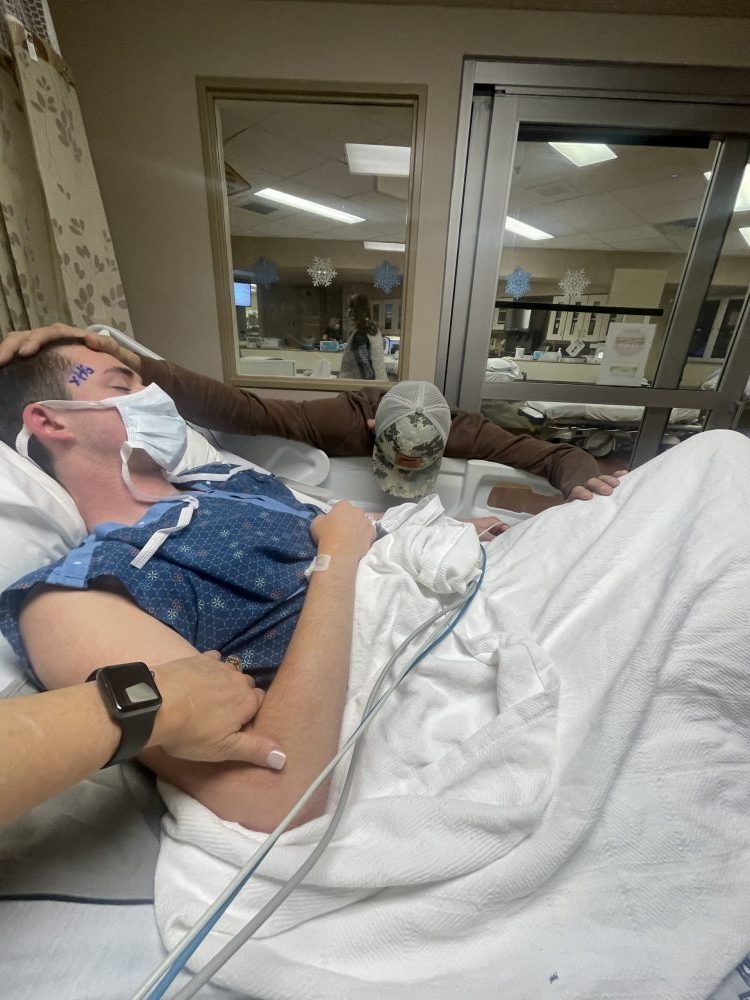 And although I almost didn’t take a picture this moment, I am glad I did.  I did it because I wanted to show it to Luke, and for it to always be a reminder to Him that God is our source of strength.

When it was time for them to take Luke, we gave him hugs, and kisses on his forehead, and told him we will see him soon.   And then he was slowly rolled down the hall with nurses on each side.  My heart felt frozen for a few seconds, and then Cy put his arm around me and said it was going to be okay.

Then we walked back to Luke’s neuro room and waited.

Prep for the surgery began around 7:30 am.  They told us the surgery could be anywhere from 6-8 hours.  It was going to be a long day.

We stayed in his room for a couple hours and then walked down to the cafeteria to get something to eat.  I wasn’t hungry at all, but Cy likes to eat when he’s nervous.  haha!  So he got some food, and I just got something to drink.

Then we went back up to Luke’s room and stayed there the rest of the day.  Every couple of hours, one of the nurses in the surgery room would call us and keep us updated on the progress.  Each time she told us that Luke was stable and doing well, and that the doctors were pleased with how everything was going.

I am SO thankful for the amazing doctors and nurses at Vandy!  They were above amazing!

About 4:30 that afternoon, we got the best call ever!  The surgery was over, and Luke did great!  The nurse told us that we would be able to see Luke in the next hour or so.

When they finally wheeled my sweet boy into the room, I could hardly contain my joy!  Of course, he was out of it, but he could hear us and knew we were there.  And I thought he looked great to have just had brain surgery! 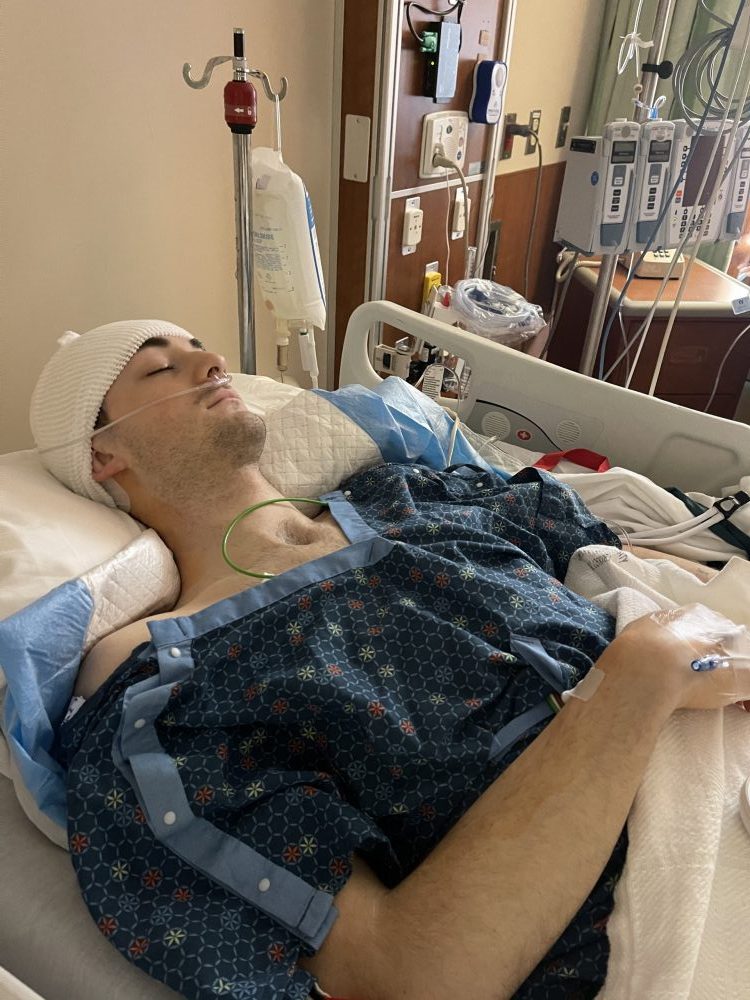 After the anesthesia began to wear off, he was able to sit up and talk to us.  The nurses kept coming in to check his vitals and ask him questions like “What’s your name?” and “”What hospital are you in?” to check his cognitive abilities. 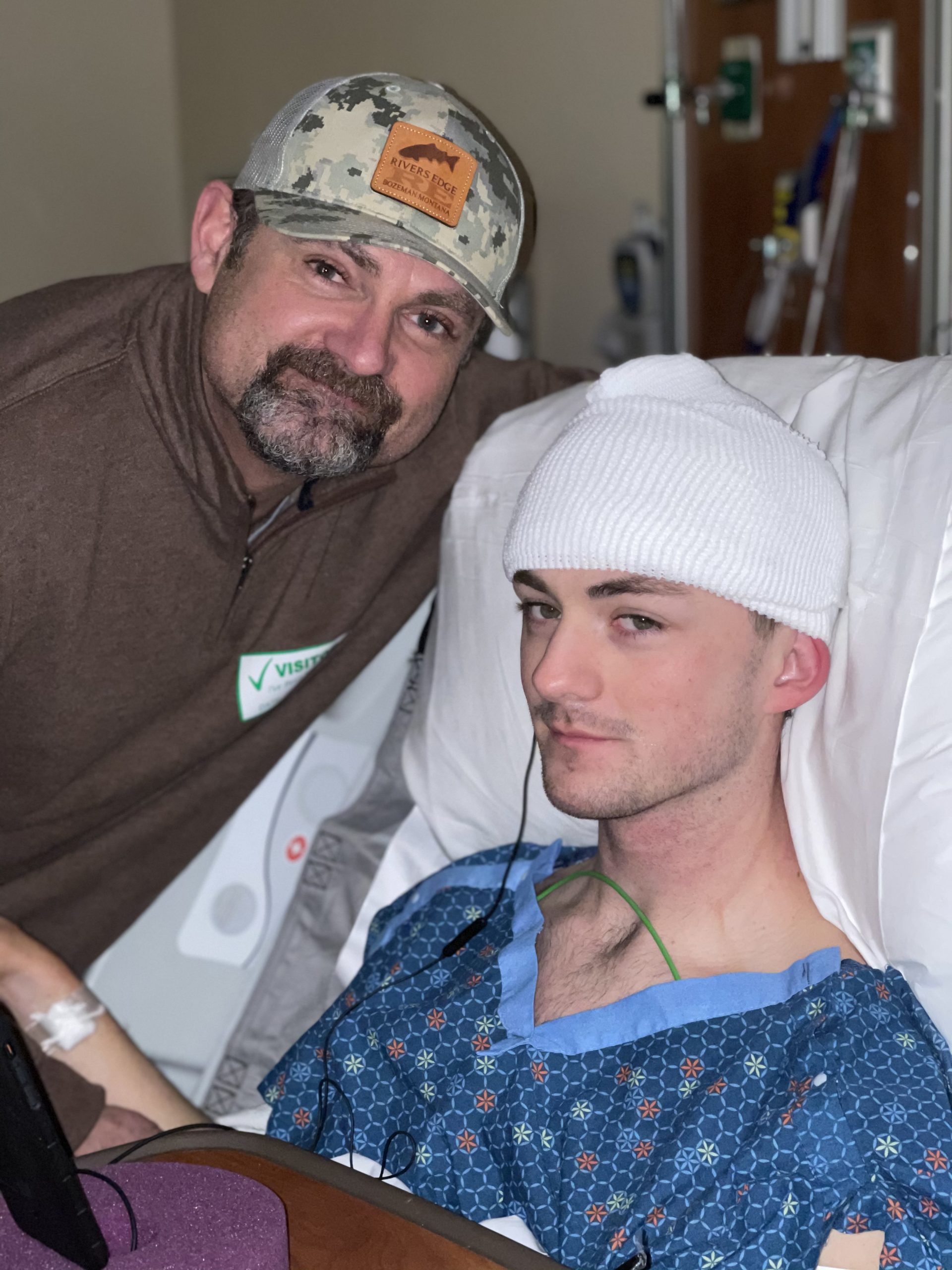 We couldn’t believe how alert he was!  Here is a screenshot I took of a video on my phone… 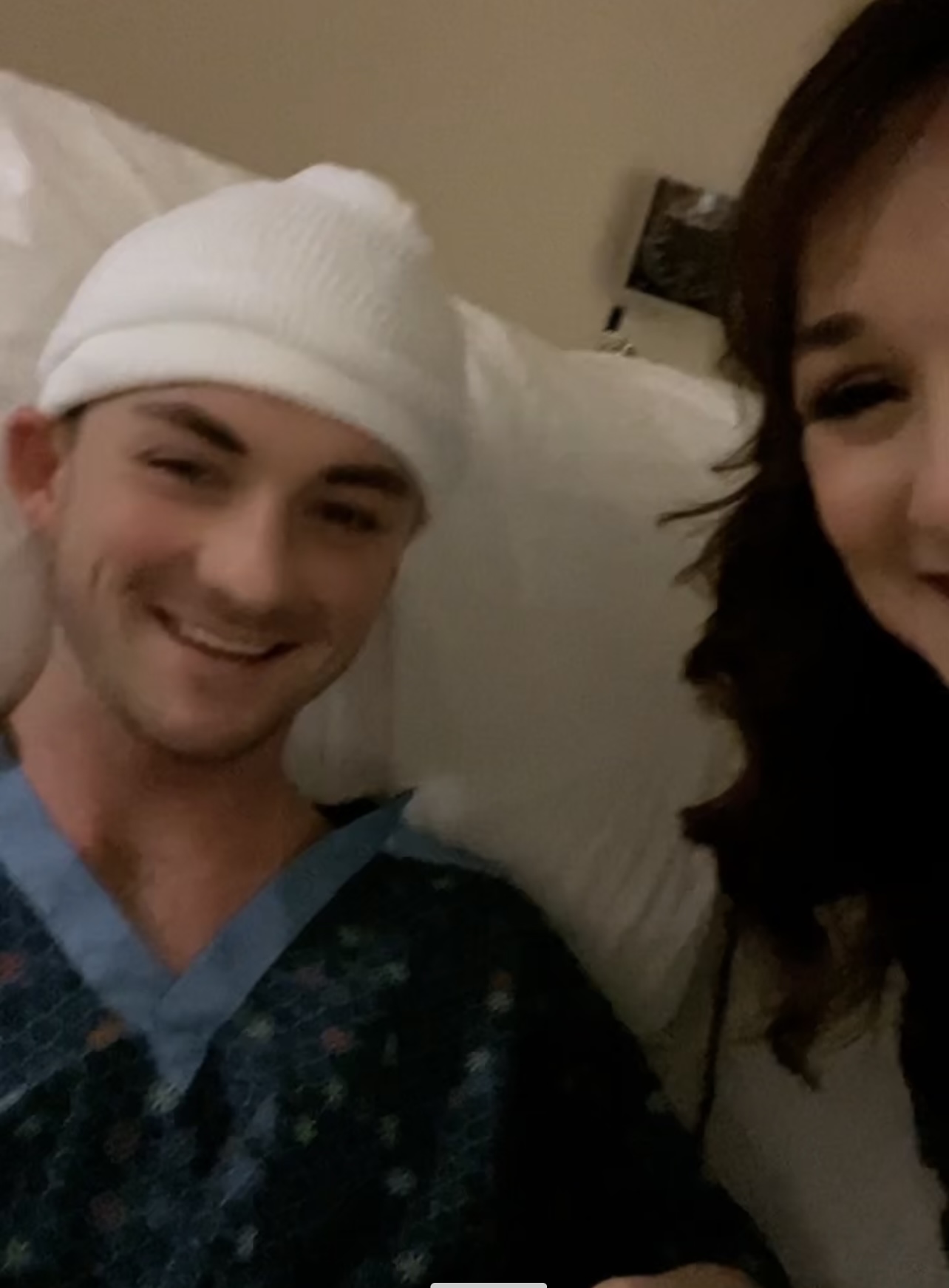 He actually face-timed many family and friends within hours of his surgery!  It was crazy!

But then he got tired and slept for a long time.   He slept pretty good that night, but the nurses had to come in hourly throughout the night to wake him up and check on him.

Friday morning, the physical therapy team came and had Luke walk around the hallways and walk up some stairs to see how his motor skill were working.  They were AMAZED with how great he did!  He actually walked up more steps that they asked him to.

I spent the day with Luke in his room, he called a lot of his friends, we watched some t.v., and we walked the halls together.  The nurses continued to check on him and give him pain medication.  Luke was doing SO GOOD!

Early Saturday morning, one of the doctors came in and removed Luke’s head wrap.

The scar made my knees weak, but it also wasn’t as bad as I thought it would be. 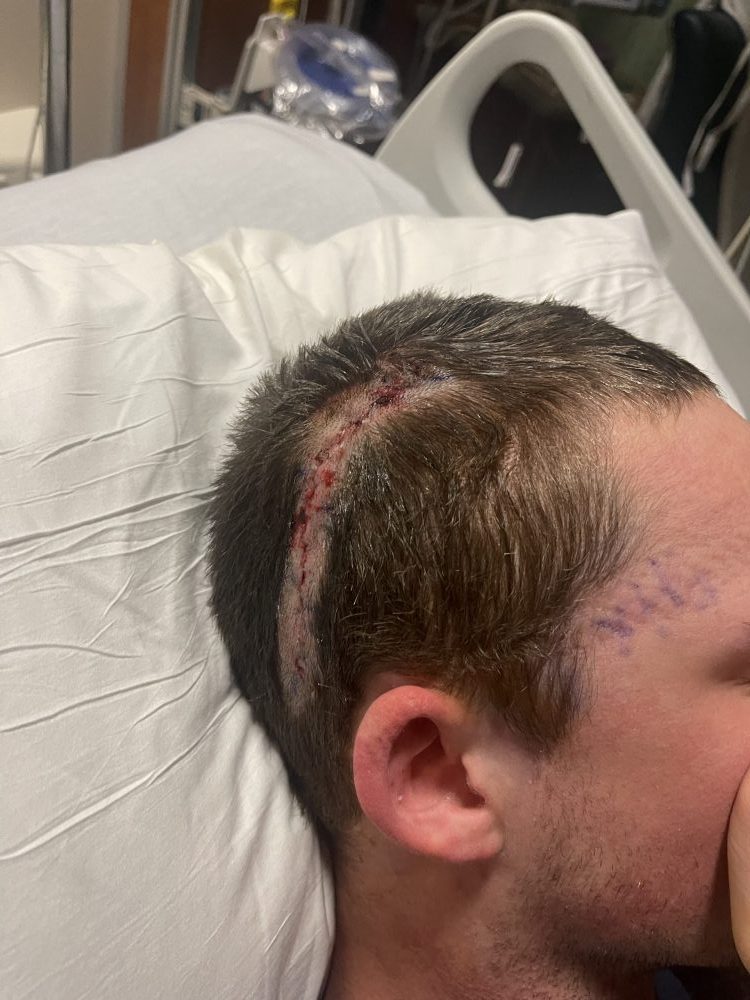 The doctors said his hair will grow over it, and we will hardly be able to notice it.

Luke continued to do well Saturday, and the doctors let us know that they believed he was okay to go home that day.   He took a shower that afternoon because the doctor said he could let water run over the scar.  Luke was so glad he could finally take a shower.

We casually gathered things up and then left the hospital late in the afternoon.

Luke’s next appointment is March 8th for a check up, and then they said he will have an MRI in about 6 months to check everything out and make sure that every healed well.

Until then, he is to take it easy, but should be back to regular activities in a couple more weeks.  At that time, he will fly back to LA where he is living.  (That’s when you need to stop praying for him and pray for ME!!!! haha!  I’m gonna miss him SO MUCH after having such much time with him this past month.).

Here he is a couple of days ago with a fresh new fade and some legos that someone sent him in the mail to pass some time. :) 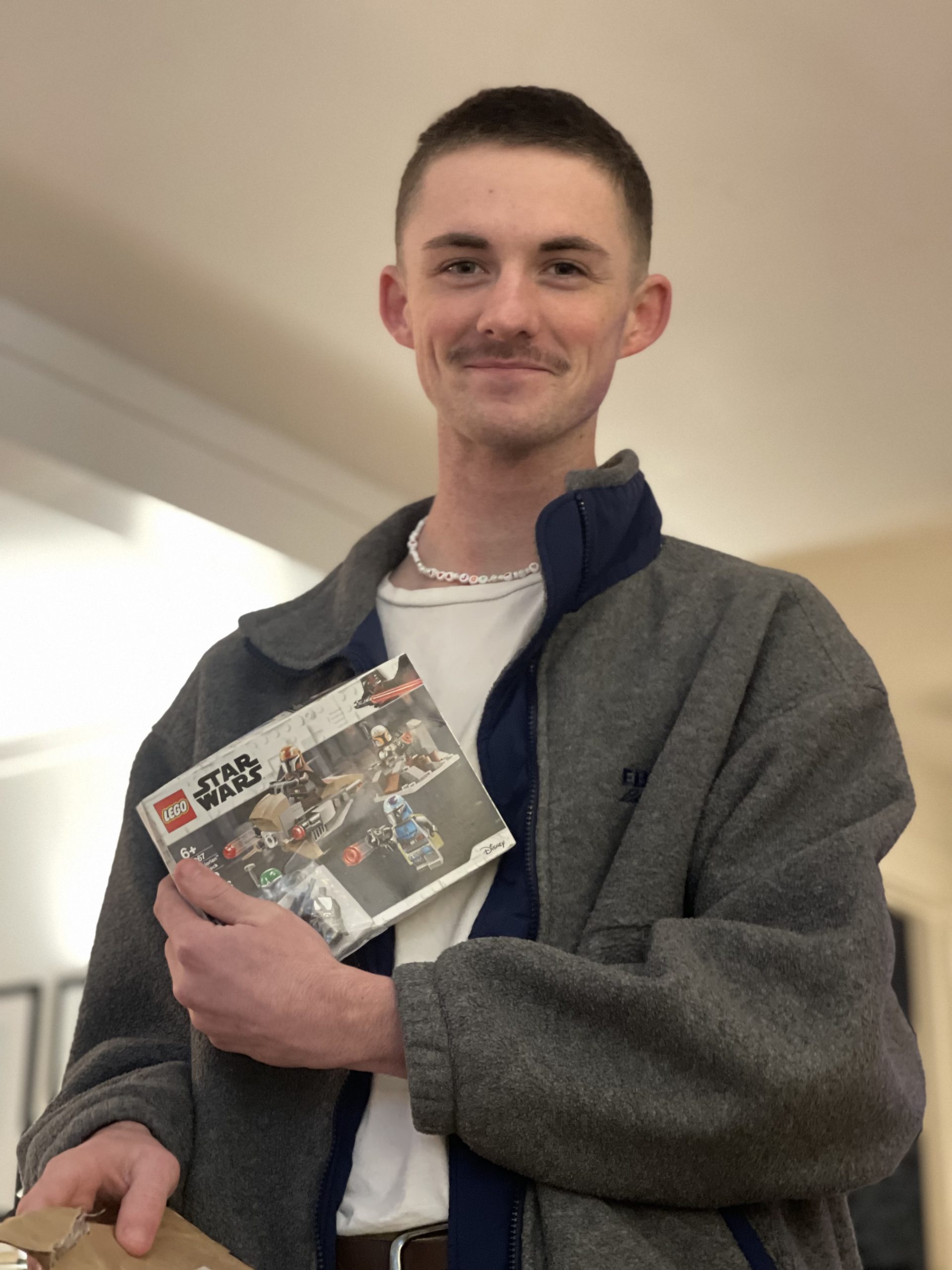 He’s my little miracle boy.  LOVE HIM SO MUCH!

Again, thank you so much for your prayers and encouragement throughout this trying time in our family.  We appreciate you more than you will ever know!

« Luke is having Brain Surgery
WE SOLD OUR HOUSE! What?!!! »