Last night, I was looking through the latest Pottery Barn Kids magazine for some decorating inspiration, when I saw something that caught my eye.

It was something that looked very familiar to me.  A boy’s burlap lampshade. I recognized it because it looks eerily similar to the lamp shades I made for my boys’ room 3 years ago! Yep!  It was my idea first!

(Okay, maybe not.  But I’m am TOTALLY claiming it as my original idea!)

I had never seen anything like them before.  I just had some lamp shades for my boys’ room that needed some updating.  So I decided on burlap, (since it is my favorite material in the world.)  But they were still a little too plain, so I decided to paint some red numbers on them to match the colors in their room.

These lamp shades were featured a lot in blogland, so I think the folks at Pottery Barn saw them and was inspired by ME.  (A girl can dream, right?!)

Anyway, since I completed this project “pre-Pinterest” days, I thought I would share the post with my readers again.  (Especially since I have about 4,000 new readers since I first published this!)

I am loving the new update for the lamp shades in my boys’ room! It’s exactly what I had envisioned in my head. I bought some lamp shades from Target for the boys’ room a couple of years ago. They weren’t exactly what I was looking for, but they were the right size and shape, (and price). They were covered with a tan paper that began to bubble. I tried to ignore it, but it was driving me crazy. 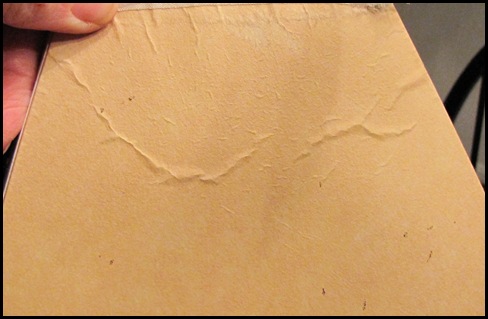 I began to think about how I could recover them…maybe with new material? blue? red? khaki? And then it hit me….BURLAP, BABY!

If you don’t know about my obsession with burlap, just click on “burlap projects” in my archives, and you’ll get a good idea.

I already had some leftover burlap, so I quickly got to work. First I pulled the navy blue trim off of the lamp shade. That was super easy. Then I took my burlap and wrapped it around the shade. I covered each side of the shade with fabric glue and a sponge brush and pressed the burlap to the shade. Then I let it dry. I tucked the edge of the material under and secured it with my glue gun. Press the seam down and it will lay nice and flat. Just be careful because the glue can seep through the holes of the burlap! Trust me…I know! Once I had the whole shade covered in burlap, it was time to put the trim back on. First, I trimmed the burlap around all of the edges with my scissors.  Next, I got out my trusty glue gun and glued the ribbon back on. They were already looking sooooo good to me! But it needed something else.  They were just a little too plain for me.

Sooooo. I bought some stencils at Michael’s (with a coupon) for 4 bucks. Then I got out my sponge brush and the same paint that I used to paint the boys’ collector’s shelves. (Colonial Red) 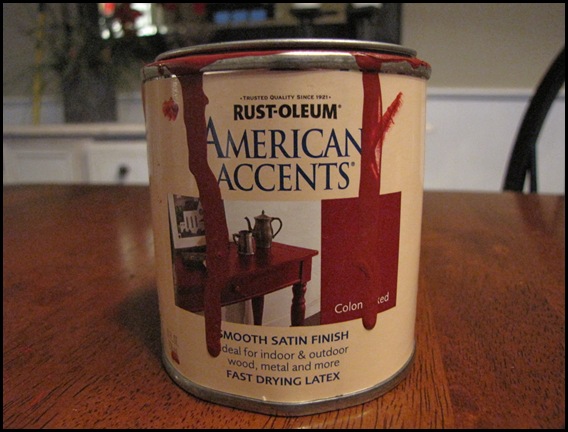 I let the boys picked out a number that they wanted stenciled on their lamp shade, and I got to work. I taped the stencil in place and applied the paint with my sponge brush. Then I used a smaller paint brush to go over the edges of the numbers to make them more even. They are perfect! To me, at least. It was nighttime when I took the pictures of the lamp shades in the boys’ room, so I used my flash for some of them. ( I usually try not to do that, but in this case I thought some of the pictures turned out better with the flash.) The boys are thrilled! They love having those lamps beside their beds to read at night. If you want to learn how to make a collector’s shelf similar to the ones in the boys’ room, click HERE. I bought the swing arm lamps at Goodwill for $2.50 a piece. They were an ugly brass, so I spray painted them with a metal spray paint from Lowe’s. It was called “hammered metal” or something like that. It was two years ago… 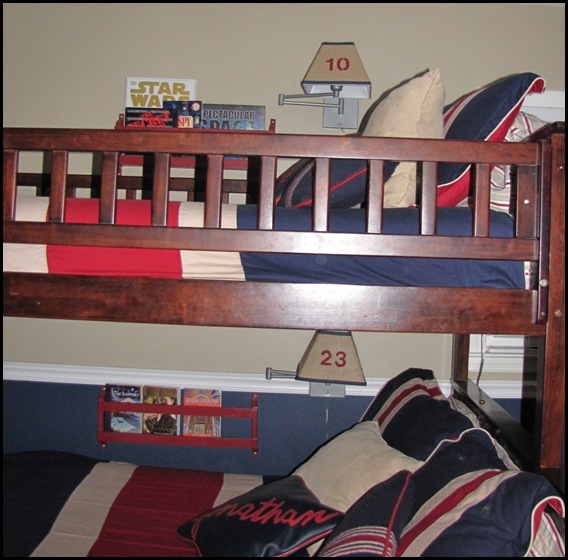 Well, that’s it! It took me about 30 minutes to complete this project. It was well worth the time and $4.00 I spent on it. Don’t you agree?

So there you have it!

What do you think?  Do you agree they copied off me?  (I’m not looking for honesty here, y’all!)

Maybe I should change their picture a little (hee,hee)… (P.S.  If you were to find out that Pottery Barn had these lamps shades for sale before I made mine, please do not leave a comment telling me so.  It will burst the little happy bubble I am living in right now.)